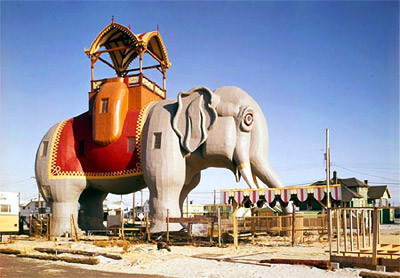 A fascination of architects and scholars for centuries, follies are autonomous structures that might serve as memorials, meeting points, or observation towers; typically, they serve no function at all. Folly—The View from Nowhere, organized by MOCA Curator Philipp Kaiser and Los Angeles–based architects Frank Escher and Ravi GuneWardena, surveys architectural follies from around the world in an installation at MOCA Pacific Design Center, the museum’s West Hollywood venue designed by Cesar Pelli and located on Pacific Design Center’s campus. Offering a comparative overview of these structures—ranging from the Pantheon at Stourhead in Wiltshire, England, and Lucy the Elephant in Margate, N.J., to Pelli’s pavilion at Pacific Design Center—the exhibition revolves around a site-specific folly of Escher GuneWardena’s own design.

Though the building of follies flourished in European gardens of the aristocracy in the 18th and 19th centuries, the origin of their forms can be traced to ancient monuments such as the Pantheon of Rome or Chinese pavilions of the first millennium BCE. While many of the follies from the more recent era referenced historic ruins, the architectural quotation was often only superficial. The purpose and symbolism of the original monuments were misunderstood or ignored, allowing new roles to be ascribed to the objects being copied and set in their new context. For instance, as a folly, the often reproduced pagoda form, an Eastern variant of the Indian stupa, lost one of its most important elements, the central pillar—symbolizing the connection between earth and sky, man and the cosmos—in order to make room for serving tea or playing cards. Through their site-specific installation at MOCA Pacific Design Center, Escher GuneWardena explore a broad selection of these structures and their varying meanings, uses, and associations as the original forms are repurposed in different cultures at different times throughout the world.

Since partnering in 1995, Escher and GuneWardena have addressed issues of sustainability and affordability, and engaged in the dialogue between form and construction through their residential and commercial architecture and exhibition design projects. Their firm, Escher GuneWardena Architecture, has designed many private homes, restored John Lautner’s 1960 Chemosphere House, and collaborated with artists Olafur Eliasson, Mike Kelley, and Sharon Lockhart on exhibition designs. They also conceived the exhibition design for the 2008 Carnegie International exhibition at the Carnegie Museum of Art in Pittsburgh, Penn., and designed Blum & Poe's new gallery space in Culver City, Calif.

Folly—The View from Nowhere is made possible by endowment support from The Ron Burkle Endowment for Architecture and Design Programs. The exhibition is sponsored by Dwell. Generous support for MOCA Pacific Design Center is provided by Charles S. Cohen.