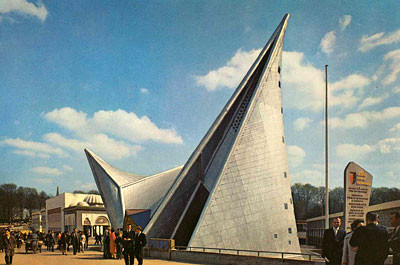 This exhibition features the role of drawing in the work of Iannis Xenakis (b. 1922, Brăila, Romania; d. 2001, Paris), a major 20th-century figure who brought together architecture, music, and advanced mathematics. A contemporary of fellow avant-garde composers, including Karlheinz Stockhausen, Pierre Boulez, and John Cage, Xenakis also created revolutionary designs while working with modern architecture pioneer Le Corbusier. Many of Xenakis's innovations in music and architecture were realized first on paper, resulting in hundreds of striking graphic documents that exemplify how the drawing process was used as a means of "thinking through the hand." The exhibition, the first in North America dedicated to Xenakis's original works on paper produced between 1953 and 1984, includes more than 60 rarely seen musical scores, architectural drawings, conceptual renderings, and samplings of his innovative graphic notation. Exhibition visitors will be able to listen to recorded excerpts of music corresponding to works on view through listening stations and iPods. Xenakis received formal engineering instruction at the Athens Polytechnic Institute in Greece from 1940 to 1947. A Greek Resistance fighter in World War II, he fled to Paris as a political refugee in 1947, where he collaborated with Le Corbusier from 1947 to 1959, first as an engineer and later as an architect. He also studied music composition at the Paris Conservatory from 1950 to 1953 with Olivier Messiaen, who encouraged him to develop the compositional process for which he later became legendary. Rejecting traditional harmonic polyphony, he integrated then-new mathematical theories and, later, computer assistance, to create musical compositions characterized by masses of sound, shifting abstract aural gestalts, and sonic pointillism. This interdisciplinary approach is also characteristic of his architectural designs for which mathematics and musical concepts were important inspirations.

Iannis Xenakis: Composer, Architect, Visionary is co-curated by Sharon Kanach and Carey Lovelace and organized by The Drawing Center, New York, where the exhibition was on view January 15 through April 8, 2010. It will then travel to the Canadian Center for Architecture in Montréal from June 17 through October 17, 2010. Iannis Xenakis: Composer, Architect, Visionary is accompanied by a fully illustrated catalogue that includes essays by Ivan Hewitt, Lovelace, Kanach, and Makhi Xenakis.

MOCA's presentation is made possible by endowment support from The Ron Burkle Endowment for Architecture and Design Programs. In-kind support is provided by Dwell. Generous support for MOCA Pacific Design Center is provided by Charles S. Cohen.

The exhibition has been produced with the exceptional cooperation of the Bibliothéque nationale de France.
www.moca.org