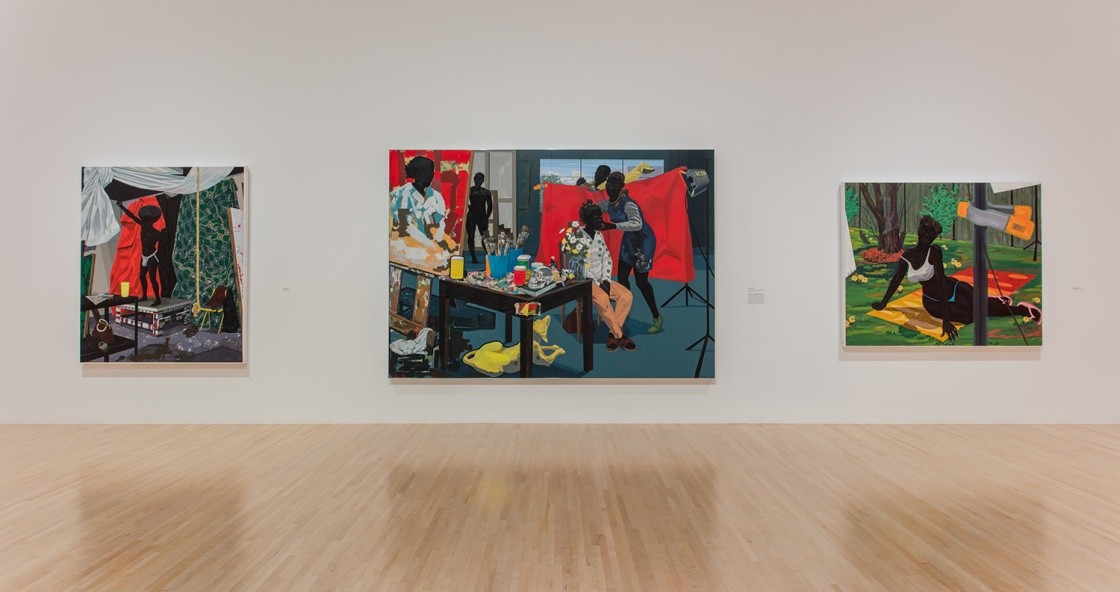 MOCA is pleased to present a 35-year retrospective of painter Kerry James Marshall, co-organized by the MCA Chicago, MOCA, and The Metropolitan Museum of Art under the leadership of MOCA’s Chief Curator Helen Molesworth. Marshall’s figurative paintings have been joyful in their consistent portrayal of African Americans. The now nearly 600 year history of painting contains remarkably few African American painters and even fewer representations of black people. Marshall, a child of the civil rights era, set out to redress this absence. “You can’t be born in Birmingham, Alabama, in 1955 and grow up in South Central [Los Angeles] near the Black Panthers headquarters,” Marshall has said, “and not feel like you’ve got some kind of social responsibility. You can’t move to Watts in 1963 and not speak about it. That determined a lot of where my work was going to go...”

This exhibition, Marshall’s first major retrospective in the United States, contains nearly 80 paintings, all of which contain images of Black subjects going about their daily business, presented with utter equality and humanity. A deeply accomplished artist, who makes ravishing paintings, Marshall’s strategy was three fold. First, as a young artist he decided to paint only black figures. He was unequivocal in his pursuit of black beauty. His figures are an unapologetic ebony black, and they occupy the paintings with a sense of authority and belonging. Second, Marshall worked to make a wide variety of images populated with black people. This led him to make exquisite portraits, lush landscape paintings, everyday domestic interiors, and paintings that depict historical events, all featuring black subjects as if their activities were completely and utterly normal. Third, Marshall concentrated on painterly mastery as a fundamental strategy. By mastering the art of representational and figurative painting, during a period when neither was in vogue, Marshall produced a body of work that bestows beauty and dignity where it had long been denied.

The exhibition will unfold in chronological order, allowing the viewer to trace the development of Marshall as a painter. The exhibition also charts our nation’s evolving ideas and attitudes towards race, beginning with a an exploration of Ralph Ellison’s classic novel Invisible Man, which explores the lack of legibility of African Americans in the culture at large, to a suite of paintings dedicated to the exploration of Black love, to portraits of members of the Cato slave rebellion, and culminating in paintings made during the Obama presidency, which feature a stunning set of portraits of black artists at work in their studios. The exhibition catalogue, edited by MOCA Chief Curator Helen Molesworth, chronicles Marshall’s career and contains sumptuous color plates of all of the works in the exhibition. It is the most authoritative book on the artist’s work to date.
www.moca.org