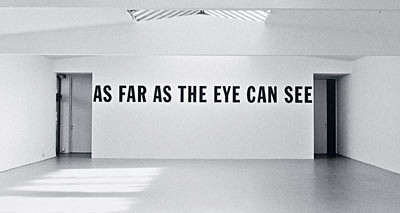 The first major United States retrospective of the work of New York-based artist Lawrence Weiner (b.1942, Bronx, NY), one of the key figures associated with the emergence and foundations of conceptual art in the 1960s, Lawrence Weiner: AS FAR AS THE EYE CAN SEE provides a comprehensive examination of Weiner’s remarkable and cohesive oeuvre, assembling key selections and bodies of work from throughout his 40-year career. Lawrence Weiner has defined art as “the relationship of human beings to objects and objects to objects in relation to human beings,” and that premise remains at the core of all of his work. The conditions of a work of art have been the basis of Weiner’s approach since 1967, using language as a material object. The exhibition represents the full range of Weiner’s practice, from the Propeller and Removal paintings of the 1960s, to the artist’s “specific and general” works—language-based pieces that have maintained a consistent presence in his work since 1968. The exhibition also includes the full breadth of his production with works on paper, films, videos, books, posters, public commissions, multiples, and audio works. Co-organized by The Museum of Contemporary Art, Los Angeles, and the Whitney Museum of American Art, New York, this landmark exhibition is co-curated by MOCA Senior Curator Ann Goldstein and Whitney Museum Chief Curator and Associate Director for Programs Donna De Salvo. At the Whitney Museum from November 15, 2007 to February 10, 2008, the exhibition will be on view at MOCA from April 13 to July 14, 2008. A comprehensive catalogue, co-published by MOCA and the Whitney Museum and produced in close collaboration with the artist, accompanies the exhibition. Designed by award-winning graphic designer Lorraine Wild, the publication features essays by Kathryn Chiong, Liam Gillick, Edward Leffingwell, Dieter Schwarz, and Gregor Stemmrich, along with exhibition curators Donna De Salvo and Ann Goldstein, and a special