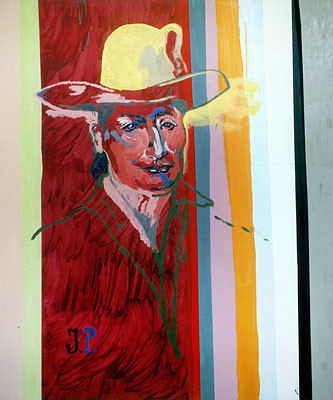 One of the most significant and influential artists of our time, German artist Martin Kippenberger (1953–97) produced a complex and richly varied body of work from the mid-1970s until his untimely death in 1997 at the age of 44. Kippenberger’s life and work were inextricably linked in an exceptional practice that centered on the role of the artist in the culture and within the system of art. With references, subjects, and sources as wide-ranging and diverse as his production, his oeuvre examined and expanded upon that role as he also cast himself as impresario, entertainer, curator, collector, architect, and publisher. The first major retrospective exhibition to be mounted in the United States, Martin Kippenberger: The Problem Perspective includes key selections and bodies of work from Kippenberger’s entire career: paintings, sculpture, works on paper, installations, multiples, photographs, posters, announcement cards, and books. This ambitious, large-scale exhibition is curated by MOCA Senior Curator Ann Goldstein and accompanied by a fully illustrated catalogue— published by MOCA and co-published by the MIT Press—which constitutes a comprehensive and scholarly examination of the artist’s career. The exhibition travels to The Museum of Modern Art, New York (MoMA), where it is on view from March 1 to May 11, 2009.
The Problem Perspective is made possible by endowment support from the Sydney Irmas Exhibition Endowment.
Major support is provided by Andre Sakhai, Audrey M. Irmas, Wonmi and Kihong Kwon, The Andy Warhol Foundation for the Visual Arts, Carol and David Appel, Blake Byrne, Galerie Gisela Capitain, David and Susan Gersh, Mark Fisch, The Margaret and Daniel Loeb–Third Point Foundation, Lois G. Rosen, Christina and Mark Siegel, Elizabeth Swofford, Sheridan Brown, Tim Nye and Foundation 20 21, Edward M. Israel, and John Morace and Tom Kennedy.
In-kind media support is provided by Los Angeles magazine.
89.9 KCRW is the Official Media Sponsor of MOCA.
Ovation TV is the Official Network Partner of MOCA.
www.moca.org