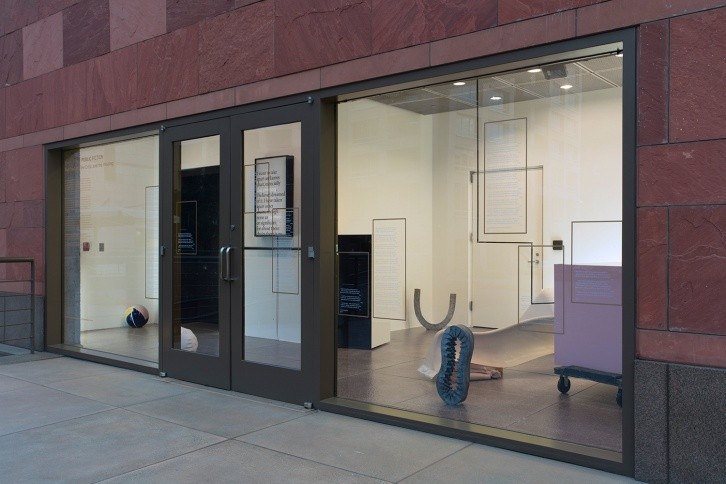 ​storefront: is a project that invites artists and artist collectives to inhabit the anteroom space of The Marcia Simon Weisman Works on Paper Study Center on the plaza level of MOCA Grand Avenue. It is an opportunity for MOCA to reimagine what it means to be “the artist’s museum” in a city filled with artist-run spaces and initiatives. Following the inaugural installation, Imitation of Wealth by Noah Davis, Public Fiction moves into MOCA’s storefront: space with the project entitled The Poet and The Critic, and the missing.

Founded in 2010, Public Fiction is run by Lauren Mackler and features a rotating cast of collaborators. Originally a project space in the Highland Park neighborhood of Los Angeles, Public Fiction is now a journal and roving exhibition that experiments with the idea of the exhibition as a medium, and uses exhibitions as a way to distribute ideas. Exhibitions lasting three months are presented on a variety of topics and include related talks, film screenings, secret restaurants, concerts, and performances and culminate into a published journal. At MOCA, Public Fiction takes the new installation of MOCA’s permanent collection as a starting point for a series of performances, lectures, and artist-driven interventions, all of which becomes the content for a publication.

The publication component of storefront: Public Fiction: The Poet and The Critic, and the missing will live online and accumulate over the course of the project as a monthly pairing of short texts and fugitive thoughts on a shared topic. These texts—on the themes of The Poet, The Critic, and The Missing—will be published online and eventually recited in the MOCA Grand Avenue galleries by performers as the program series reaches its end.
Participants will be presented in two iterations:
March 19–May 1, 2016: Nathaniel Mackey, Nevine Mahmoud, and Lynne Tillman
May 3–June 6, 2016: Nancy Lupo, Litia Perta, and Paul Mpagi Sepuya
Online publication: publicfiction.moca.org
Contributors to the online publication:
Sophia Al Maria, Corrine Fitzpatrick, Quinn Latimer, Ann Lauterbach, Fred Moten, and Michael Palmer
the missing screening on May 5, 2016 will present:
Isaac Julien, Alfred Leslie (with Frank O'Hara), Maha Maamoun, and Mungo Thompson