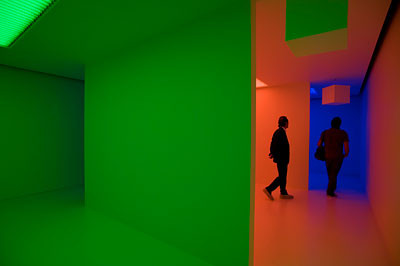 Suprasensorial: Experiments in Light, Color, and Space is the first museum exhibition to situate pioneering Latin American artists among the international canon of those working with light and space. The exhibition aims to illuminate the field by expanding the dialogue surrounding light-and-space practices in contemporary visual art beyond the California tradition of the late 1960s and '70s to include pivotal Latin American impulses expressed more than a decade earlier. Organized by MOCA Curator Alma Ruiz, Suprasensorial: Experiments in Light, Color, and Space will position Latin America as the source of new ideas about the nature and function of art through the re-creation of important large-scale installations by five highly regarded and influential artists: Carlos Cruz-Diez (b. 1923), Lucio Fontana (1899-1968), Julio Le Parc (b. 1928), Hélio Oiticica (1937-80) and Neville D’Almeida (b.1941), and Jesus Rafael Soto (1923-05). Like Southern California–based artists Peter Alexander, Larry Bell, Robert Irwin, James Turrell, and DeWain Valentine, Cruz-Diez, Fontana, Le Parc, Oiticica, and Soto may be better classified as inventors rather than as painters, sculptors, or photographers. Each has conducted groundbreaking investigations of human perception and sensation, consistently challenging preexisting standards of art as a static two-dimensional experience in ways that have provoked new and extraordinary levels of viewer engagement. Suprasensorial: Experiments in Light, Color, and, Space seeks to underscore their innovative contributions to contemporary art, properly acknowledging their sophisticated manifestations as essential to the ongoing global light-and-space tradition. Following its presentation at MOCA, Suprasensorial: Experiments in Light, Color, and, Space will travel to the Hirshhorn Museum and Sculpture Garden in Washington D.C., where it will be on view from June 23 through September 11, 2011. The exhibition will be accompanied by a generously illustrated 112-page catalogue featuring a selected exhibition history, bibliography, and major essay by Ruiz, who will present an overarching analysis of each work featured in the exhibition and will link the artistic intentions of Cruz-Diez, Fontana, Le Parc, Oiticica, and Soto to those of historic California light-and-space artists as well as younger artists working today.

Suprasensorial: Experiments in Light, Color, and Space is presented by Fundación Jumex.