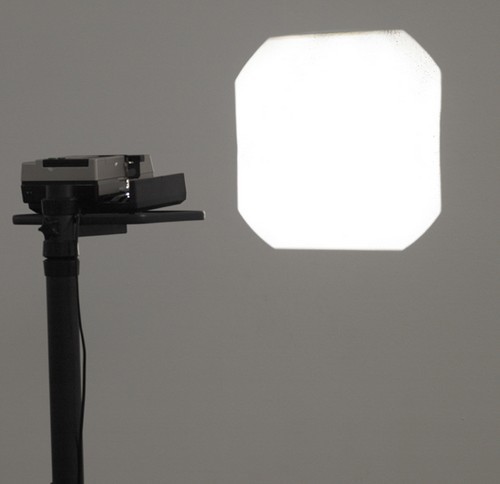 This mid-career survey is Floyer’s first solo museum exhibition in the United States, featuring multi-media works from the late 1990s to the present. The exhibition is part of MOCA’s Knight Exhibition Series and is curated by MOCA Executive Director and Chief Curator Bonnie Clearwater.
Floyer’s deceptively, minimal conceptual works emerge from her daily experiences rather than from theory. Many of her trigger points result from peripheral observations of everyday non-events and her work often deals with the structure and syntax of the English language. Her works elegantly reveal her thought process and heighten our awareness to the way our mind perceives and comprehends the moments she creates.

The exhibition takes its name from Floyer’s 2002 work, Auto Focus, consisting of a carousel slide projector pointed at a wall, endlessly going through its automatic process of focusing its projection. However, there is no carousel to display slides and therefore there is nothing to project except the projector’s own light. The viewer’s automatic response is to focus on the illuminated projection glowing on the wall as this is where one usually looks when viewing a slide presentation. Auto Focus is more than just the light. It is a sculpture, or more specifically, a readymade that was purchased. It’s almost human in its perseverance at its futile task and it is a lot like most of us who follow instructions exactly as prescribed until an artist like Floyer comes along and challenges our perception by directing our gaze in unexpected directions.

Overgrowth, (2004), a slide projection of a bonsai tree is scaled to the size of a large wall. When a bonsai is arranged in a garden with similarly scaled plants it appears as a full-size tree from a distance. However, the scale of Overgrowth, has nothing to do with perspective or relative size. Rather its dimensions are determined solely by the distance that the projector is placed from the wall. The distance between the wall and projector rather than the image is the subject of the work.
In Floyer’s sound work, 0-10, (2010), which premieres in this exhibition, she exploits the role memory plays in conditioning our response. The work consists of an official sounding voice counting from zero to ten. The voice intones zero with excitement, but with each number the emotional tenor is noticeably reduced. Ultimately it dawns on the listener that the recording is the countdown for a rocket launch in reverse and there is never the anticipated “lift off!”

Sound and form combine in Drain, (2005), which consists of a small round black speaker installed on the floor with its black cable trailing off toward a CD amp unit. The speaker intermittently amplifies the sound of water spiraling down a drain. The sound effect creates a compelling sensation that the speaker is the drain and the entire room is emptying into its vortex. Sound and image are established as two separate entities in the audio visual installation, Dancing Flames, 2007, in which a film of a candle flame and its ghostly dancing partner is reflected in a glass and projected on a wall while music emanates from speakers positioned on the rear wall of the installation. Music alternates in genre and pauses between tracks while the flames never stop dancing. Even after viewers become aware that the two parts of this exhibition are independent of one another, they are likely to imagine that the dancing flames are syncopated to the music.
Born in 1968, Ceal Floyer currently lives and works in Berlin. She received her BA in 1994 from GoldsmithS College in London.

CEAL FLOYER: AUTO FOCUS IS MADE POSSIBLE WITH SUPPORT FROM THE JOHN S. AND JAMES L. KNIGHT FOUNDATION AND IS PART OF THE MUSEUM OF CONTEMPORARY ART’S KNIGHT EXHIBITION SERIES. ADDITIONAL SUPPORT FOR THE EXHIBITION IS PROVIDED BY CINDI AND MARTIN NASH.
www.mocanomi.org