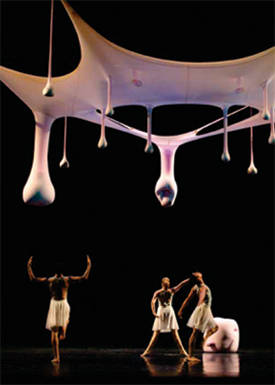 Throughout his more than five-decade career, legendary avant-garde choreographer Merce Cunningham has joined with such renowned visual artists as Robert Rauschenberg, Jasper Johns, and Andy Warhol, to create dynamic decor and costumes for his productions. A new two-part exhibition presented by the Museum of Contemporary Art (MOCA) will be the first in the U.S. to focus on the pioneering modern choreographer’s collaborations with visual artists from 1997 to the present.

Merce Cunningham: Dancing on the Cutting Edge will be on view from January 26 – April 29, 2007 (Part 1) at MOCA’s Joan Lehman Building in North Miami, and from April 21 – June 24 (Part 2) at the museum’s satellite gallery in Wynwood, MOCA at Goldman Warehouse. The two-part exhibition is organized by the Museum of Contemporary Art and curated by MOCA Executive Director and Chief Curator Bonnie Clearwater. It is presented in collaboration with Carnival Center for the Performing Arts as part of the Merce in Miami celebration that showcases the life and work of Merce Cunningham through collaborations with arts organizations in Miami–Dade County.

Clearwater notes, “In most cases, artists who have collaborated with Cunningham have been transformed by the experience. As in all of Cunningham’s productions, the dance, décor and music exist independent of one another, and yet the points where they intersect, whether by chance or design, produce sublime moments. Cunningham clearly lives for moments when order emerges from chaos, and it is his ability to recognize the possibilities in these collaborations that gives his work a life of its own.”

• Olafur Eliasson’s Convex/Concave, a large circular mirror foil on a frame, connected to a pneumatic pump, that served as the décor for one of the performances in MCDC’s week-long series of Events at New York’s Joyce Theater in 2000.

• Ernesto Neto’s Otheranimal, a 40-foot wide mixed media installation of nylon and netting created for Cunningham’s Views on Stage, 2005 that was first performed at the Festival Theatre in Edinburgh, Scotland in 2004.

• Charles Long’s design for the set of Cunningham’s 2001 production, Way Station. For this work, Long created Tripods, five free-standing sculptures that resembled long-limbed space aliens, which the dancers could move under and through. Costumes were designed by James Hall, wardrobe supervisor for the Merce Cunningham Dance Company, to contrast with the pastel-colored tripods. The placing of fabrics, appliqué, and panels, was decided either mathematically or by chance.

• Christian Marclay’s video projection backdrop that was created for Cunningham’s week-long series of Events at New York’s Joyce Theater in 2004. The images and sound of this video projection were planned to briefly disrupt the performance in an unexpected and random way. To create the work, Marclay set up a camera on the side of a small country road in Maine where he filmed the occasional car and truck whizzing by.

• Robert Rauschenberg’s costumes for Cunningham’s Interscape, 2000, a work for 14 dancers that also features music by John Cage. For the costumes, Rauschenberg hand silk-screened collaged images on 28 sets of white leotards and tights at his studio in Florida.

Bonnie Clearwater, MOCA Executive Director and Chief Curator, recommended several Miami artists as potential collaborators for the project. Trevor Carlson, MCDC’s Executive Director, presented these possibilities to Merce Cunningham, who subsequently selected Daniel Arsham to be the décor artist for the piece. One of Miami’s most promising young artists, Arsham reworks the architectural and natural forms of our everyday experience into malleable and movable models with surreal and uncanny effects. His work is included in MOCA’s permanent collection and has been featured there in several group exhibitions since 2001. This will be Arsham’s first solo museum exhibition.

David Behrman has been active as a composer and multimedia artist since the 1960s. Most of his work since the late 1970s has involved computer-controlled systems operating interactively with people who may or may not have musical expertise.


Catalogue
An illustrated catalogue featuring an essay by Bonnie Clearwater, Museum of Contemporary Art Executive Director and Chief Curator, and a forward by Trevor Carlson, Executive Director of the Merce Cunningham Dance Company, will accompany the exhibition. The catalogue will be available through the MOCA Shop, 305.893.6211 ext. 26.


Information
For information about the exhibition Merce Cunningham: Dancing on the Cutting Edge and Museum of Contemporary Art, please call 305.893.6211 or visit www.mocanomi.org.

Open Wednesday through Saturday, noon to 5 pm
Second Saturdays of every month from 7 – 10 pm
Admission by donation.

MERCE CUNNINGHAM
Merce Cunningham, born in Centralia, Washington, received his first formal dance and theater training at the Cornish School (now Cornish College of the Arts) in Seattle. From 1939 to 1945, he was a soloist in the company of Martha Graham. He presented his first New York solo concert with John Cage in April 1944. Merce Cunningham Dance Company was formed at Black Mountain College in the summer of 1953. Since that time Cunningham has choreographed nearly 200 works for his company.

Cunningham has worked extensively in film and video, in collaboration first with Charles Atlas and later with Elliot Caplan. His interest in contemporary technology has also led him to work with the computer program DanceForms, which he has used in making all his dances since Trackers (1991). In 1997 he began work in motion capture with Paul Kaiser and Shelley Eshkar of Riverbed Media to develop the décor for BIPED, with music by Gavin Bryars, first performed in 1999. Another major work, Interscape, first given in 2000, reunited Cunningham with his early collaborator Robert Rauschenberg, who designed both décor and costumes for the dance, which has music by John Cage.

In August 2001 Merce Cunningham returned to the stage in the first theatrical presentation of John Cage’s An Alphabet, at the Edinburgh Festival. In the revival of How to Pass, Kick, Fall and Run (1965), first performed in the 2002 Lincoln Center Festival at the New York State Theater, Merce Cunningham read the accompanying stories by John Cage, together with David Vaughan.

In October 2005 Merce Cunningham received the Praemium Imperiale in Tokyo. Cunningham was also a recipient of the National Medal of Arts in 1990 and the Kennedy Center Honors in 1985, in which year he also received a Laurence Olivier Award in London and a MacArthur Fellowship. In France, he was made Commander of the Order of Arts and Letters in 1982 and first Chevalier (1989) and then Officier (2004) of the Légion d'Honneur, For additional information, please visit www.merce.org or call 212.255.8240 ext. 10.