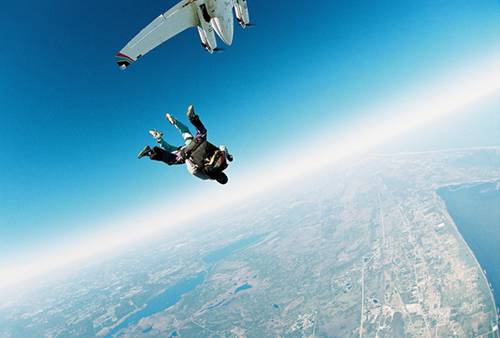 A new video installation by Miami artist Natalia Benedetti will premiere on February 24 at MOCA at Goldman Warehouse, the Museum of Contemporary Art’s new annex in the Wynwood area of Miami. Natalia Benedetti: Luminosity is the first solo museum exhibition for Benedetti and is comprised of two videos on continuous loop, each a study of light and space. Both pieces address personal enlightenment -- one through quiet contemplation and the other through a new experience that displaces everyday reality.

Projected on a 9 by 12 foot screen, Flexibility and Lightness, 2005 was shot during the artist’s freefall from a skydiving jump. The video begins with a coarse jump from a twin-engine aircraft that quickly turns into a controlled freefall as the artist and her instructor begin to descend from 18,000 foot altitude at 125 mph. As the figures move and twirl through the atmosphere, only the flapping of their clothes reveal the intensity of the speed. Behind them the curve of the earth is ringed with the glowing light of early day and the coastline shimmers below the beauty of the vast infinite sky.

Luminosity, 2005 is a close-up study of sunlight as it plays on the surface of a lake. The sparkle comprises a dazzling effect, which is both abstract and realistic. “I see this piece as a metaphor for existence, “ said the artist. “The lights appear and disappear seemingly without any connection to each other when in fact they are part of a totality.” The two screens are positioned so that the viewer experiences both videos simultaneously. A soundtrack of rushing wind accompanies the installation.

Natalia Benedetti is a native of Venezuela who has lived in Miami since 1992. She received her B.F.A. degree from Miami’s New World School of the Arts in 2000 and she is affiliated with the artist run project Placemaker. Her work has previously been shown at MOCA’s Joan Lehman Building in North Miami in the group exhibitions Making Art in Miami: Travels in Hyperreality (2000), The House at MOCA (2001) and MOCA and Miami (2005).

Natalia Benedetti: Luminosity was organized by the Museum of Contemporary Art and is sponsored by Cindi and Martin Nash. It will remain on view until June 4, 2006.


ALSO ON VIEW at MOCA AT GOLDMAN WAREHOUSE

Selections from the Permanent Collection: Ongoing