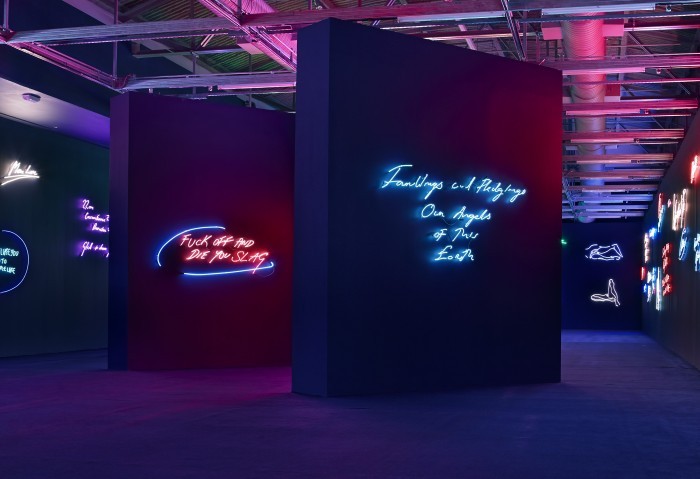 The Museum of Contemporary Art (MOCA), North Miami, kicks off Art Basel Miami Beach 2013 with the opening of “Tracey Emin: Angel without You,” the first American museum exhibition dedicated to the acclaimed British artist Tracey Emin.

On view from December 4, 2013 through March 9, 2014, this is the first-ever exhibition to focus on Emin’s works in neon, a crucial aspect of the artist’s practice that began with her iconic The Tracey Emin Museum (1995), which opens the show. The exhibition explores how Emin’s neons have played an essential role in the development of her work, marking a shift from her early diaristic and confessional style to a more cryptic and open-ended form of expression. Organized by MOCA as part of the Knight Exhibition Series and initiated by Bonnie Clearwater, “Tracey Emin: Angel without You” comprises more than 60 works from the past two decades. The exhibition title is drawn from a new large-scale neon work by Emin, on view in MOCA’s courtyard during the exhibition.

“Tracey Emin: Angel without You” continues the artist’s longstanding relationship with MOCA, which was the first American museum to purchase one of her works when it acquired the seminal film Why I Never Became a Dancer in 1998. This film—which features scenes from Emin’s childhood home in the British seaside resort town of Margate, replete with vintage neon signs—explores the story of Emin’s tumultuous adolescence and loss of innocence. Why I Never Became a Dancer (1995) will be included in the exhibition, which will also feature several of Emin’s most notable neon works, such as Sorry Flowers Die (1999) and I can feel your smile (2005). Many of these works consist of epigrams that transcribed into neon from Emin’s own handwriting.

“As a towering figure in Britain’s contemporary art community—and arguably one of the most significant female artists of her generation—Tracey Emin is long overdue for a solo museum exhibition in the United States,” says Clearwater. “As an early supporter of Tracey’s work, we’re thrilled to mount this unprecedented exploration of her neon sculptures—a medium that is not only appropriate to the neon-rich cityscape of South Florida, but has its origins in Emin’s hometown as captured in the film Why I Never Became a Dancer.”

In conjunction with MOCA’s exhibition, Skira Rizzoli is publishing a comprehensive book on Emin’s neons, also titled Angel Without You. Compiled in close collaboration with Emin, the book will include an essay by Clearwater about Emin’s development, work, artistic influences, and spiritual and poetic inspirations, especially the thirteenth-century Persian mystic poet Rumi; as well as an essay by the contemporary artist and writer Gary Indiana. It will be released in November 2013.

ABOUT TRACEY EMIN
Tracey Emin (b. 1963, London) is internationally recognized for the blunt and revealing style that pervades her work. Drawing from personal experiences, Emin reveals emotional situations with brutal honesty and humor in a wide variety of media, including painting, drawing, embroidery,neon, installation, sculpture, and film.

Emin studied printmaking at Maidstone College of Art, Kent, and continued her studies at Royal College of Arts, London, where she earned a Master’s degree in painting. Emin’s first commercial gallery exhibition was held at London’s White Cube Gallery in 1993. In 1999, Lehmann Maupin presented Tracey Emin’s first solo gallery exhibition in the United States, Every Part of Me’s Bleeding. Emin subsequently exhibited her infamous installation “My Bed” at the Tate Gallery, for which she was shortlisted for the Turner Prize. In 2007, she was chosen to represent Great Britain at the Venice Biennale, becoming the second female artist to ever do so. That same year, Emin was made a Royal Academician and was awarded an Honorary Doctorate from the Royal College of Art, a Doctor of Letters from the University of Kent and a Doctor of Philosophy from London Metropolitan University. In January 2013, Queen Elizabeth II appointed Emin a Commander of the Most Excellent Order of the British Empire for her contributions to the visual arts.
In addition to MOCA North Miami’s collection, Emin’s work can be found in many of the world’s most prestigious public collections, including the Albright-Knox Gallery, Buffalo; Brooklyn Museum of Art, New York; British Museum, London; Camden Arts Center, London; Centre Georges Pompidou, Paris; Denver Art Museum; Garage Center for Contemporary Culture, Moscow; Hara Museum, Tokyo; Museum of Contemporary Art, Los Angeles; Museum of Modern Art, New York; National Portrait Gallery, London; Neue Nationalgalerie, Berlin; Saatchi Collection, London; San Francisco Museum of Art; Tate Gallery, London; and Walker Art Centre, Minneapolis.
www.mocanomi.org