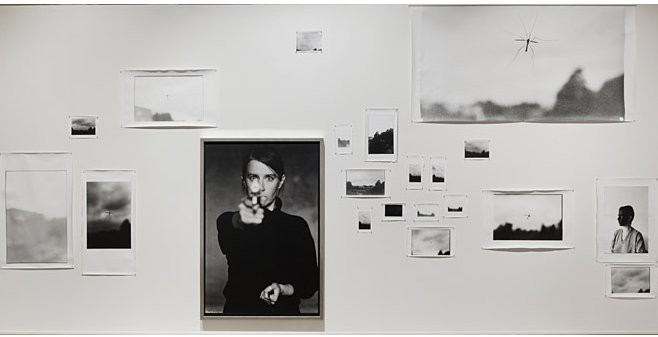 In the photograph Self-Portrait (1993/2011), Cecilia Edefalk is holding a revolver in one hand, aiming it at me as a viewer. Her other hand is holding a camera trigger. However, the moment the picture was taken the revolver was pointing at a camera. As she aims at the camera lens she takes a self-portrait.

Eighteen years later, Cecilia Edefalk has made a much larger print of Self-Portrait and is showing it together with the photo Painting (1992/2011) and photos from the series Crane Fly (2011) as a wall installation. Painting can also be seen as a self-portrait – although with her face painted black. Crane Fly is photographs of an insect, a daddy long-legs, which Edefalk happened to see when it landed on her kitchen window.

The wall is composed as a totality. The approach is familiar from Cecilia Edefalks previous oeuvre. She returns, repeats and alters her own works in a continuous exploration of how retakes influence the creation of meaning. This becomes tangible not least when she combines three apparently disparate components in one and the same unit.

Portrait is the overall title of the wall. But a portrait of what? Self-Portrait and Painting revolve around the issue of whether a portrait can ever capture the real or true self (if indeed such a thing even exists). In one of the pictures, the face is painted black, and in the other Cecilia Edefalk appears to be threatening to shoot herself the moment she takes the photo. She seems to be destructively erasing herself in both images.

Edefalk challenges the veracity of photographic portraits. But not knowing, or rather, not being able to choose what image of myself I want to live with, my own or that of others, leads to an emotional quagmire. The daddy long-legs in the window also have a precarious existence. They are shooed off, squashed, without any moral qualms. Allowed to live, their natural lifespan is short – they subsist on the nourishment that exists in their bodies when they are born. It is fragile. My image of myself.