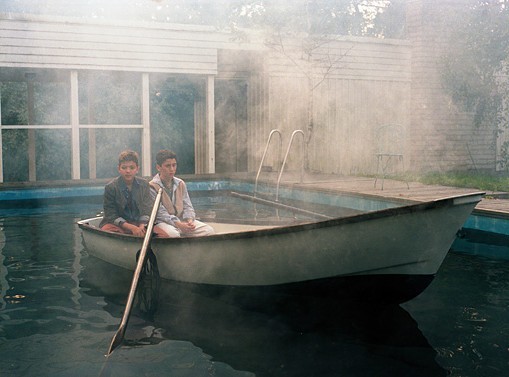 Eija-Liisa Ahtila’s cinematic installations challenge habitual perspectives and disclose different perceptive worlds. She is a seminal narrator in moving images, who probes questions on what it really means to be human and a subject. Recurring in her works is a condition of uncertainty – about distances in time and space, and ambiguous mental states or identities. Ahtila seeks to make the viewer aware of how our experience of the surrounding world is both determined and delimited by our sensual perceptions.
Eija-Liisa Ahtila’s fascination for film as a technique and medium permeates her entire artistic output. She twists and turns the very cornerstones of the medium, playing with traditional cinematic narrative. How can films tell a story with tools borrowed from painting, poetry or reportage? Ahtila also reveals how easily we are deceived into believing in the world as it appears through the lens. The works in this exhibition are mainly from recent years, with an emphasis on Ahtila’s interest in perception and the portrayal of inner and outer worlds, from Me/We, Okay, Gray, an iconic video work from the early 1990s, to the very recent installation Horizontal. Eija-Liisa Ahtila’s working process often begins with writing. Information gathered about a subject is interwoven with fictive elements and references to other works of art and literature, in complex and multifaceted narratives. Her productions are ambitious, using film teams and actors. The films are shown as large spatial installations with multiple projections, as in this exhibition, or as cinema screenings at film festivals all over the world.

In her recent works Ahtila deals with our relationship to animals, partly influenced by the radical biologist Jakob von Uexküll (1864–1944), who described the study of other species as “excursions to worlds beyond our knowledge”. Similarly, Eija-Liisa Ahtila enables us to experience a diversity of such simultaneous yet parallel worlds. Eija-Liisa Ahtila lives and works in Helsinki. Her works have previously been shown at the MoMA, New York, Jeu de Paume, Paris, Tate Modern, London, and Kunsthalle Zürich. She has participated in numerous international exhibitions, including the Venice Biennale in 1999 and 2005.

Eija-Liisa Ahtila lives and works in Helsinki. Her works have previously been shown at the MoMA, New York, Jeu de Paume, Paris, Tate Modern, London, and Kunsthalle Zürich. She has participated in numerous international exhibitions, including the Venice Biennale in 1999 and 2005.