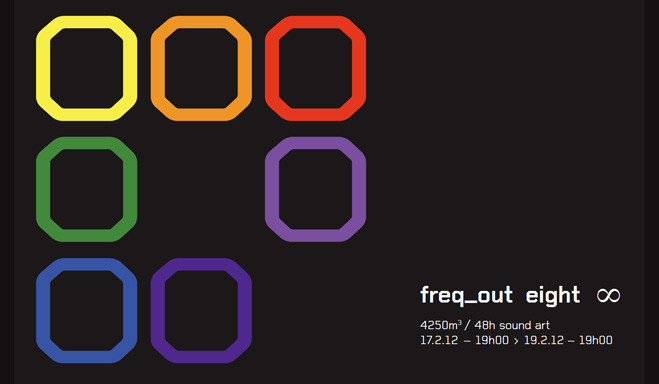 Moderna Museet is going to be open from 7 pm February 17 through 7 pm February 19. For forty-eight hours, seven of the museum ́s galleries will be occupied by the sound installation freq_out 8. The result will be a combination of sound and light that will "drench" the galleries in all the colors of the rainbow.
Concept by Carl Michael von Hausswolff.

Sound has played an enduring role in contemporary visual art through the last hundred years. freq_out 8 is a sound installation that comprises twelve individual sound pieces, each of which makes use of a specific sound frequency, all of them together building a landscape of sound. Each of the artists participating in freq_out is given a different frequency in which to create his or her own work on site in the museum. These sounds have no beginning or end, but exist in a constant flow, acting in a sculptural way. For 48 hours, seven galleries at the Moderna Museet will present only sound art. Between 8 PM and 2 AM Friday and Saturday nights, each of the artists will make a personal presentation.

“The sound installation now being constructed at Modern Museet is probably the biggest composite piece of sound art ever exhibited in an art museum—forty-eight hours and 4,250 cubic meters,” says artist Carl Michael von Hausswolff, who developed the concept for freq_out.

The first edition of freq_out was developed in 2003 as one of several workshops held at Kunsthal Charlottenborg in Copenhagen under the rubric Disturbances – Sound as Space Creator. Since then, freq_out has been presented in Paris, Berlin, Kortrijk and Oslo at art and music festivals such as Nuit Blanche, Sonambiente, All Ears, and Ultima.

von Hausswolff continues:
“It feels completely natural that it would be Moderna Museet who shows this work in grand-scale. Throughout its life, the museum has demonstrated an interest in, and knowledge of, sound as an important component of art. They’ve understood the connection between John Cage, Robert Rauschenberg, and Merce Cunningham, and thus made it possible for multi-disciplinary artists like Öyvind Fahlström, Åke Hodell, and recently Sten Hanson and Eija-Liisa Ahtila to show their work there.“

Artist presentations on stage in the corridor, level 4 at Moderna Museet