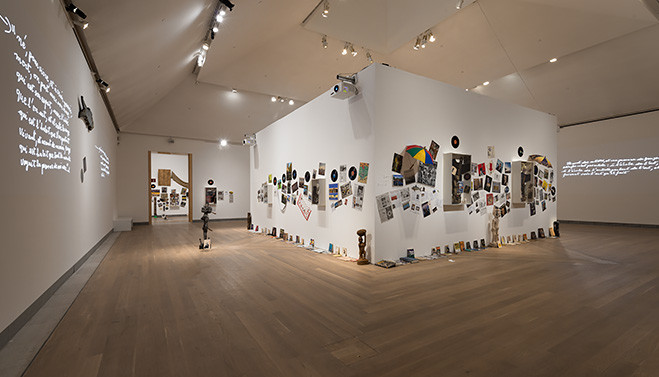 Georges Adéagbo (b. 1942 in Cotonou, Benin) creates site-specific installations where news cuttings, posters, books, postcards, clothes and his own handwritten texts are interwoven with sculptures and paintings from Benin into complex three-dimensional collages.

Georges Adeagbo, 2014
Georges Adéagbo, Moderna Museet 2014
Photo: Åsa Lundén/Moderna Museet
Adéagbo’s work has been shown internationally since the 1990s, and especially since his participation in the Venice Biennale in 1999. He bases his work on the city that has invited him, exploring and examining its architecture, history, culture and the myriad of other aspects that make up the identity of a place. Through chains of association, autobiographical references and cultural translation he creates what has been called an ‘archaeology of knowledge’, giving rise to new narratives.

“In Georges Adéagbo’s new work for Moderna Museet, he creates a collage of events and individuals, where history, philosophy, politics and religion are recurring themes. Jesus, Queen Christina, René Descartes and Okwui Enwezor are all included in his installation. By creating new contexts and meanings, Adéagbo changes our habitual way of seeing the world,”
says Matilda Olof-Ors, curator.
www.modernamuseet.se