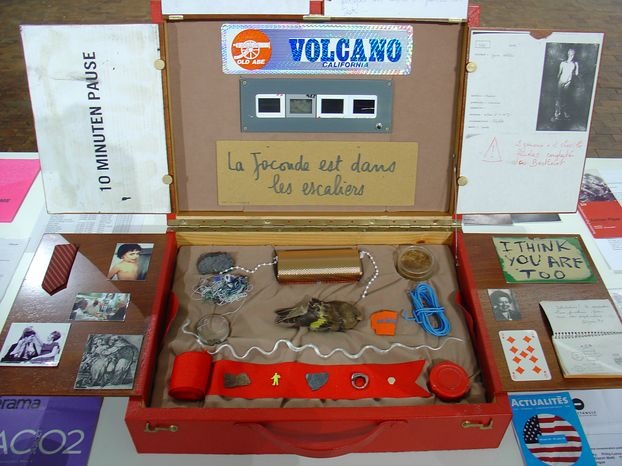 In the past few years, Ivan Moudov has devoted himself to experiencing art collections around the world in a very hands-on way. In a series of works entitled Fragments, he collects fragments of artworks he likes. He claims to have stolen the fragments from galleries and museums. He carefully arranges them in small suitcases just as Marcel Duchamp arranged miniatures of his life’s work in his famous suitcases, the Boites-en-valise. Ivan Moudov’s suitcases contain a condensed version of the international art scene. Each suitcase is accompanied by an index explaining the origin of the fragment and who the artist of the original artwork is. In a peculiar way the magical aura of the original artwork remains intact around the fragments despite the fact that they have been removed from their previous meaning and context. The situation elucidates the fetishist character of artworks. The fragments become relics and the suitcases reliquaries. The constructed elevation of artworks above the everyday becomes poignantly apparent.

An art theft perpetrated by another artist is the focus of Moudov’s piece Already Made 4. In 1971, the German artist Timm Ulrich documented his attempt to steal a colleague’s drawing from a gallery. A photograph shows how Ulrich places a bag under the framed piece where it hangs on the wall, in order to remove it and make his getaway. Ivan Moudov ventures to repeat this theft but switches the object of the larceny. The piece that is on its way into Ivan Moudov’s bag is the photo of Timm Ulrich’s attempted theft. Thus, Ivan Moudov not only steals Timm Ulrich’s piece but also his idea. However, Moudov does not stop there. He documents his theft by photographing it, frames the picture and repeats the procedure with his own photographic documentation. This is repeated until Timm Ulrich has completely disappeared from the picture. Ulrich’s piece has been entirely appropriated by Ivan Moudov – idea, image, frame, everything.

Stealing art in order to enjoy its power is nothing new. Museum collections are filled with stolen objects from centuries of looting and war. Winners take from losers.

One day Ivan Moudov taught me what he claimed was a Romanian magic trick. He said that he could split a Euro coin in two with a single hand, and make the silver-coloured interior separate itself from the gold-coloured perimeter. The trick turned out to be rather crude. It was nothing like the elegant sleight of hand employed by magicians such as David Copperfield. No, in order to separate the parts of the coin, Moudov simply threw it with all his strength onto the stone floor. Undeniably, he had split the coin in two by using one hand only.

However, no magician gives away his tricks for free. The knowledge of this trick came at a price. Ivan Moudov made a suggestion. As payment for the trick, Moderna Museet could give him a sum of money for which he would buy an artwork by a Swedish artist. Thus, Ivan Moudov created economic value by destroying money. After some research, he decided to buy an artwork by Maria Lindberg. Comprising a red string coiled in a pile on the floor, the piece is entitled 60 meter [60 metres]. The viewer may well wonder whether the string on the floor is really 60 metres long. It appears to be shorter. The artist, on the other hand, has never claimed that the string is 60 metres long. That’s just the title of the piece. It is a type of ambiguous questioning that also characterises Ivan Moudov’s art.

Ivan Moudov experiments with changing his role in the art world. He investigates the interaction between the artworld’s actors. He also explores the actual act of collecting, but this time in an entirely legal way. By analysing and manipulating the systems that govern the artists’ relationships to institutions, Ivan Moudov will now create a collection. The acquisition of Maria Lindberg’s piece, made possible by the exhibition at Moderna Museet, constitutes a starting point for his collection. So, 50 years after the birth of the Moderna Museet’s collection a new collection is born. Who knows where Lindberg’s 60 meter [60 metres] will be in 50 years time. Perhaps in a new museum of modern and contemporary art in Ivan Moudov’s hometown of Sofia.