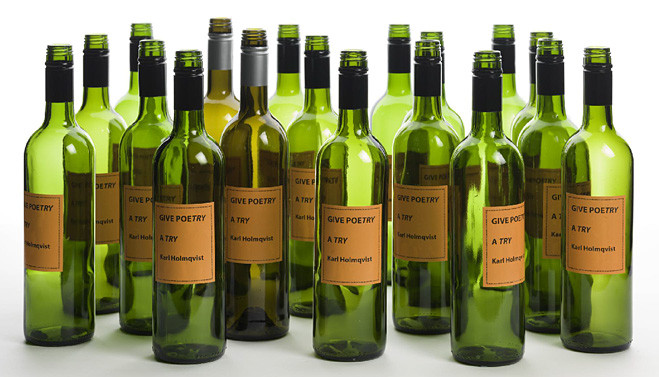 “The incomparable Karl Holmqvist,” Rirkrit Tiravanija calls his colleague and friend in a coming portrait film, and Karl Holmqvist (b 1964) certainly is like no one else. But that does not mean that his works were created in, or portray, their own, isolated universe. On the contrary, quotes, echoes, repetitions and revisions – input and output – are specifically what his art consists of.
The main part of Holmqvist’s output from the early 1990s until today consists of text, published in various forms, and thereafter processed in the form of posters, readings, videos, wall drawings and installations. Popular music, poetry, politics, literary quotations, references to art history and letters of the alphabet all interbreed. Words and sentences are moved around and combined in manners that are full of ambiguity.

One way of interpreting Holmqvist’s works is that they are about freedom. Communication depends on imitation and convention, we learn to speak by repeating, and we use language to achieve understanding. Nevertheless, the combination of words and sentences is constructed and limiting. Language is normally used with astounding compliance; we do not make up new meanings lightly, and we quickly point out linguistic "mistakes" made by others. This is analogous to how we behave as members of society. In general, we obediently follow the rules, codes, paths and spaces that are presented to us with the tacit instruction to think in a way that presumes non-thinking. GOWAITSTOP, to speak in terms of one of Holmqvist’s earlier exhibition titles.

In this perspective, Karl Holmqvist manifests a belief in the functionality of art. Misunderstandings and nonsense get to be taken seriously and gain equal levels of importance as they are re-interpreted. Unexpected links, resonances and contextualisations create new relationships. It’s about producing reality.

Hence, it is possible to relate Holmqvist to a tradition of concrete poetry and cut-up: Dada, Fluxus, Öyvind Fahlström, William Burroughs. His way of adopting, reworking, plagiarising, however, is also rooted in the conceptual questioning of original and ownership that surged in the 1960s with pop and conceptualism – exemplified, not least, by the artist Sturtevant, whose repetitions of other artists’ works anticipated the development of postmodernism from the 1980s to today.

But Karl Holmqvist need not be interpreted conceptually. When his texts are read aloud, sensual dimensions are revealed, rhythms and harmonies in pleasurable, sometimes humorous, sound plays. Nor should his words and meanings be seen merely as material. They are also memories, carefully observed and lived. In that sense, he is comparable to a generation of socially engaged artists such as the previously mentioned Tiravanija, or Wolfgang Tillmans. Tillmans’ subjectively biographical approach to photography – seeing his images is like seeing the world through his eyes – is similar to that of Karl Holmqvist. Holmqvist mixes Jesus, Patti Smith, Lady Gaga, John Lennon and William Blake, to name but a few, regardless of whether they are “compatible”. The contours of a life appear: meetings, interests, observations, relationships and zeitgeist.

For a few years now, Holmqvist has been exploring the mandala shape, a geometric form that is a metaphysical or symbolic representation of the universe in Hinduism and Buddhism. In Holmqvist’s works, this symbolic power collides with both the aesthetic geometrical abstractions in art history and the logic of his own oeuvre. His way of moving words around to generate new patterns becomes more than a mere mantra when we read them, reflecting the potential of the basic geometric forms to assume new shapes and constellations.

Karl Holmqvist is firmly established on the Swedish and international art scene, and is undoubtedly one of Sweden’s most prominent artists. And yet, he has neither had a solo exhibition at Moderna Museet, nor has his work been represented in the collection until now. The current exhibition is made up of a recent acquisition of works by Holmqvist for the Moderna Museet collection, and can be seen as a mini-retrospective, as it contains a complete set of all Holmqvist’s artist’s books and printed matter, a larger installation and three video works. Also included is a donation by the artist of a set of empty wine bottles meant to serve as candle holders and inscribed with GIVE POETRY A TRY; a slogan that has been Karl Holmqvist’s signature ever since he first started working.
www.modernamuseet.se