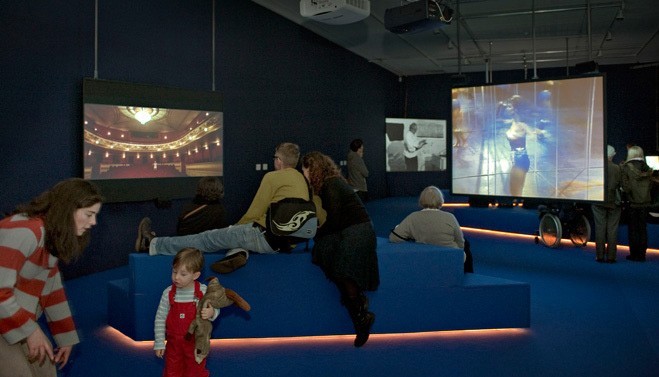 Play is a film- and video-based exhibition, designed to appeal to visitors of all ages. The name Play refers to the button on the video player as well as to games and theatre. The films, which all come from Moderna Museet’s collection, illustrate how artists have used the moving image to document performance, express feelings or create transformation.

Playing is said to be a prerequisite of culture and can be easily associated with artistic practice, as the boundlessness of play shares similarities with the creative process. A playful attitude is one of many possible perspectives for a selection from the museum’s film- and video collection. The artists in this exhibition take playing very seriously, and the playful expression leads on to more. They also play with the media of film itself, exploring and pushing it to its limits. In many cases the game is fun, but not always. It is also serious and sometimes painful.

The selection presented in Play illustrates how film as an artistic media has developed, from the experimental films of the early 1920s to contemporary large-scale productions. Play presents milestone artworks such as Diagonal Symphony by Viking Eggeling and Art Make-Up by Bruce Nauman. The exhibition also shows some of the most noteable contemporary video artists, including Pipilotti Rist and Jesper Just.
www.modernamuseet.se