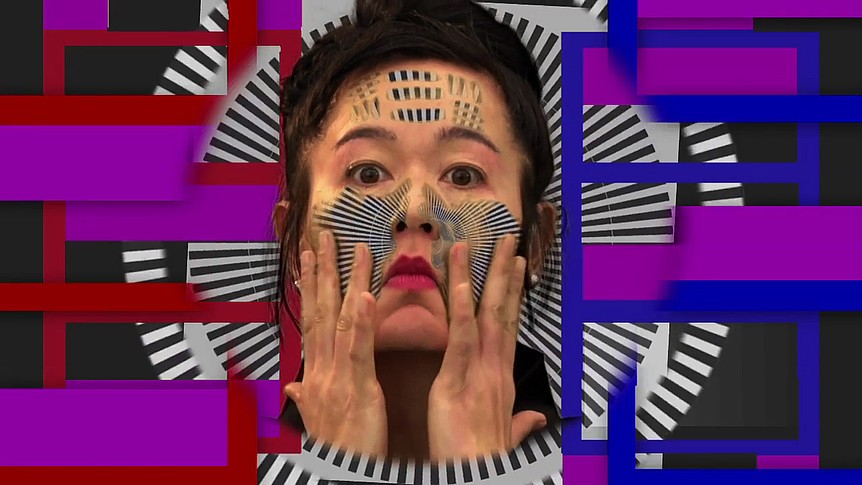 THE NEW HUMAN explores our human condition in a fast-changing world. How do we perceive ourselves as humans? How do we live, socialise, organise and control each other? And what kind of future awaits us? THE NEW HUMAN offers insights into a global warzone of religious fanaticism and political extremism, but also highlights examples of solidarity and compassion. It is an exhibition that oscillates between the hysterically absurd and the deeply serious, just as mankind seems to be skirting the borderline between ultimate disaster and the emergence of something new.

THE NEW HUMAN is a film and video based project that experiments in the borderland between exhibition and film festival. All works presented in THE NEW HUMAN have been produced since the turn of the millennium – a period profoundly influenced by the terrorist attacks in the United States on September 11, 2001, and the “war on terror” that followed. This is also a time that has seen many of the dreams that thrived amid the Arab Spring collapse in an ash heap of war and humanitarian disaster. Extremist violence is on the rise, nationalist and neo-fascist organisations and parties have established themselves throughout Europe. Today we see the largest number of refugees since the Second World War.
Participating artists: Adel Abdessemed, Ed Atkins, Robert Boyd, Esra Ersen, Harun Farocki, Kerstin Hamilton, Daria Martin, Santiago Mostyn, Ursula Mayer, Adrian Paci, Tomáš Rafa, Frances Stark, Hito Steyerl, Superflex and Ryan Trecartin.

Alongside this geopolitical development, mindboggling technological progress has raised the issue of what it actually means to be human. In nanoscience, the border between biology and technology is getting increasingly blurred. Global digitalisation has fundamentally changed our way of relating to the world around us and to each other, and the dividing line between actual and virtual reality is dissolving. Some researchers even claim that we are heading towards an era when technology has grown so complex, intelligent and self-generating that humans will no longer be able to control it.
Today, thirty-year-olds can rightfully claim that the world looks completely different compared to when they were children. In times of such rapid change, pause and reflection become increasingly important. The artists participating in THE NEW HUMAN strive to understand how new developments change our lives and in what direction we might be moving.

In THE NEW HUMAN, diverse subject matters converge on the central question of our human condition and possible future. Tomáš Rafa’s Refugees on Their Way to Western Europe documents Europe’s handling of the refugee crisis; Hito Steyerl’s HOW NOT TO BE SEEN: A Fucking Didactic Educational .MOV File, gives instructions on how to achieve invisibility in a digitised world where cameras are omnipresent; two works – Daria Martin’s Soft Materials and Kerstin Hamilton’s Zero Point Energy – are set in laboratory environments where a new humanity can be discerned; and God is Design by Adel Abdessemed creates a kind of “visual Esperanto”, fusing North African patterns and schematic drawings of human cell structures with ornamental symbols from Christianity, Islam and Judaism. Along with many other contemporary key works, the exhibition will also feature the entirely new work Atom Spirit by Ursula Mayer, which will catapult us into a post-human age.

The exhibition has previously been shown in two chapters at Moderna Museet Malmö. When it now culminates in Stockholm, it has grown to include works by Adel Abdessemed, Hito Steyerl and Frances Stark, as well as entirely new works by Ursula Mayer and Tomáš Rafa.
www.modernamuseet.se