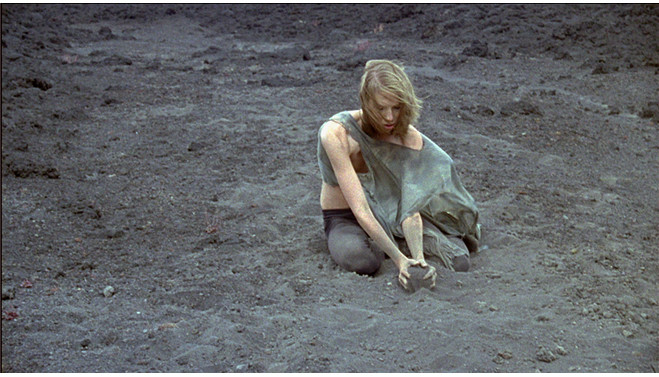 To What I Might Become is the expectant title of Ursula Mayer’s upcoming exhibition at Moderna Museet Malmö this summer. Her most comprehensive film production to date, GONDA from 2012, constitutes the focal point of the exhibition. It is a mesmerizing 30-minute film that pulls the viewer into a kaleidoscopic flow of moving images, evoking stills and abstract colour fields.
The film makes reference to the rather unknown drama Ideal of 1934 (whose fictional protagonist is named Key Gonda), conceived by the Russian-American writer and philosopher Ayn Rand (1905-82). Rand is widely known for exploring the conflict between the individual and the collective in a number of controversial novels, of which the most important are The Fountainhead from 1943 and Atlas Shrugged from 1957. As the author of Objectivism and as an important source of inspiration for leaders such as Margaret Thatcher and Ronald Reagan, Rand’s body of thought has been crucial in shaping today’s global capitalism. It seems quite impossible to imagine an existence outside of this system, but it is also an imploding system, marked by recurrent financial crises and catastrophic effects on our climate.

In Mayer’s GONDA, the main protagonist is played by transgender model Valentijn de Hingh. In a post-apocalyptic opening scene, we see her running through a volcanic landscape. The wind tugs her clothes and she emerges through the mist as the sole survivor of a big disaster, or as someone just arriving from the future. The manuscript is composed by the writer and art theoretician Maria Fusco and like the stream of images, it is splinted and fractured, without a linear narrative structure. Accompanied by a dooming soundtrack, we see faces emerging through viscous fluids, skin pulverizing and becoming porous stone or ash, all while the script’s commas and punctuations mysteriously fuse with rhythmic stills of uncanny objects.

Following the legacy of Pier Paolo Pasolini (1922-75), Mayer consistently and methodically breaks with filmic norms and conventions, in order to open up new ways of seeing and thinking. In GONDA, language, as well as categories such as gender, seem to be in the process of dissolving and the film infuses us with a feeling that something fundamental to our existence is either about to obliterate or take on a new form. In this respect GONDA can be conceived as a hymn, celebrating the potential of film as an artistic medium, while at the same time posing questions concerning our existential possibilities as humans (or post humans).

In addition, during the exhibition To What I Might Become, Moderna Museet Malmö will present Mayer’s earlier film The Lunch in Fur/Le Déjeuner en Fourrure from 2008. The film's title alludes to Meret Oppenheim's furry teacup (which the surrealist leader André Breton later entitled Le Déjeuner en fourrure) and the film presents us with a fictional meeting between the artist Meret Oppenheim, singer and dancer Josephine Baker and photographer Dora Maar. Screened within the parallel exhibition Pablo Picasso – From Arcadian Bliss to Painted Exorcism, the film will enter in direct dialogue with Picasso’s portraits of Dora Maar, and the presence of all three women – seemingly caught up in a historic loop amongst cannibalized memories and avant-garde objects – will subtly affect our perception of Picasso’s work.