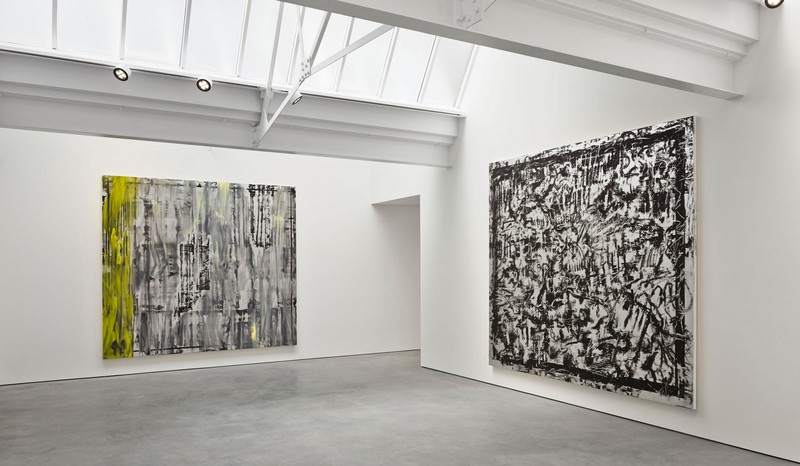 Stuart Shave/Modern Art is pleased to announce a solo exhibition of new paintings by Jacqueline Humphries. This is the American painter's third solo show with Modern Art.

Since the 1980s, Jacqueline Humphries has unrelentingly pursued the practice and critical conversation of abstract painting. She has recently spoken about making paintings as 'unfinishing' or 'unmaking' them - which is to describe a process of continually breaking into the known or recognisable structure of an abstract painting, and of disintegrating and complicating the spatial and compositional characteristics of figure/ground relationships. Humphries' use of reflective silver and fluorescent paints in differing bodies of work builds an 'optically unstable' character into the surfaces of her paintings as they variously absorb, reflect, and react to light under the conditions of their viewing and in relation to the primary physical experience of the viewer.

Jacqueline Humphries lives and works in New York, USA. Humphries' paintings were recently included in the 2014 Whitney Biennial, New York, USA, and have been shown in exhibitions at American museums including MOCA Cleveland (2012), Hessel Museum of Art, Bard College, Annandale-on Hudson, NY (2010, 2007); and the Institute of Contemporary Art, Philadelphia, PA (2001). Humphries' paintings are held by museum collections including the Whitney Museum of American Art, The Museum of Modern Art, New York, and the Smithsonian Institution, Washington DC.

Coincident with Humphries' exhibition at Modern Art is the publication of a new monograph by Koenig Books surveying Jacqueline Humphries' work, collecting together a decade of paintings with essays by David Joselit, Suzanne Hudson and Angus Cook.
www.modernart.net