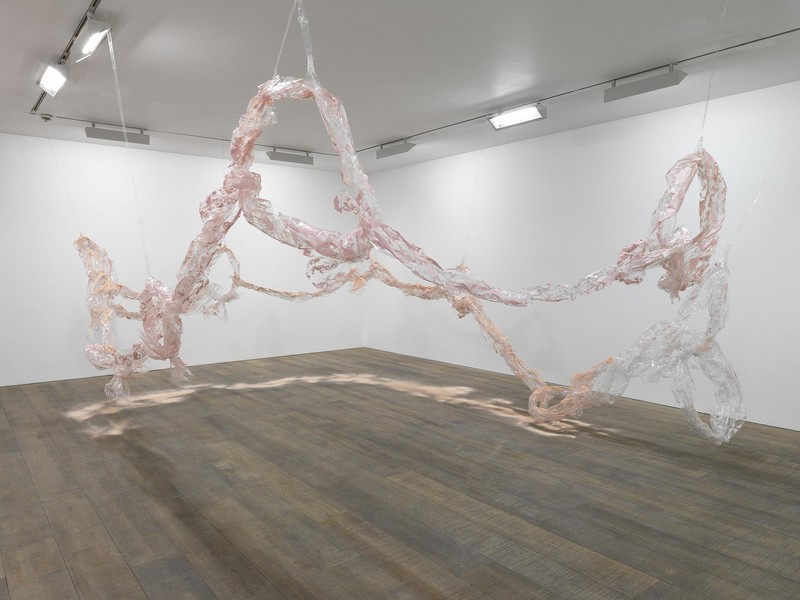 Stuart Shave/Modern Art is delighted to announce a solo exhibition of new sculpture by Karla Black. This is the artist's first solo show with Modern Art.

Karla Black’s sculptures are formed from materials that are loose, impermanent and fragile - combinations of various powders, make-up, toiletries, cellophane and polythene, along with more ordinary art-making materials such as paper, paint and plaster. The raw materials are at odds with what they become - often large scale, incredibly heavy sculptures that completely dominate and almost entirely fill the spaces they are in. Black’s practice has a theoretical underpinning in psychoanalysis, feminism, and specific points in art history that relate to ideas of formlessness and performative gesture. Nevertheless, she favours an approach to understanding gathered from the immediate physical and material experience of sculpture over that which may be derived from language. Black has described her practice as a continual exploration of thinking, feeling and relating. There is a realness that appeals to her about sculpture: it is here in the world, and can be physically and emotionally engaged with.

This exhibition at Modern Art comprises a suite of sculptures that occupy the gallery’s three exhibition spaces. Black’s new works utilise characteristically light and delicate feeling forms that, as always, embody the difficulty and chaos of the creative moment, in challenging scales and positions throughout the overall rhythm of the exhibition. The new sculptures are made predominantly from loosely painted cellophane and dusted polythene.