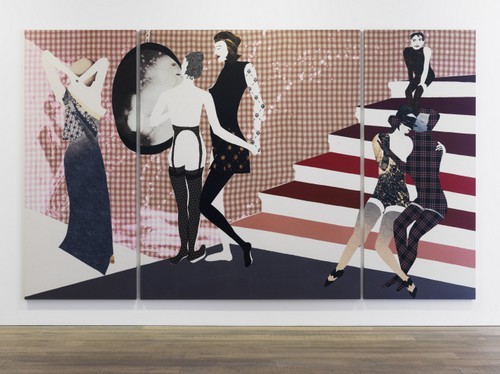 Modern Art is pleased to announce a solo exhibition of new work by Los Angeles based Dutch artist Lara Schnitger, damned women. This is Schnitger’s second solo show with Modern Art.
Lara Schnitger’s paintings and sculptures compile the signs and codes of pattern and textile, brought together in the expression and representation of figures and associations of desire. Her collaged elements bring themselves into a scene, each symbolising an attitude, position in society, and storytelling possibility. Schnitger’s materials and techniques co-opt craft processes that have latent gendered and domestic connotations. Her stitched, dyed, knitted and applied surfaces are stretched and dressed over constructed bodies that support their textile covering, in turn giving shape and lending form: be it the familiar shape of a painting, or an unexpectedly anthropomorphic free standing object. Composed of various dressed states, her paintings and sculptures allude to a state of seductive undress, revealing their own underlying structures.
Schnitger’s pictorial sensibility is sexually charged, yet underpinned by a feminist perspective that intuitively embraces the visual symbolism of seduction and themes of desire, while voicing an ambivalent position on the manner and root of that representation. Each painting composes a planar theatrical scene animated by the artist’s romantic excitement about storytelling and ornament. The patterns of her chosen fabrics nod to a style, era or mood – their formal repetitive structure counterpoised with bleach, lace patterns, and dramatic shifts in texture.
The sculptures inhabiting the gallery space are no less present, their figuration stripped back to an almost playful take on the functional structure of furniture. The sculptures’ disquieting presence differently effects the sensation of character and display of material property, bringing the physicality of Schnitger’s making to the fore. Schnitger’s paintings and sculptures are populated by a patchwork of ideas, materials and shapes that bring to life a collection of mostly female and sometimes ambiguously gendered characters – human, animal, and suggested states of metamorphosis between the two. In this new body of work her characters take on increasingly leading roles, and come together in the expression of a thematic narrative.
In her show at Modern Art, Schnitger’s work communicates a sense of looking beyond our present moment, to, from, and of, another time. One of Schnitger’s central motifs emerges from a reading of Charles Baudelaire’s Les Fleurs du Mal (1857) – from which the six censored poems known as The Wrecks stands as an enduring paragon of the nineteenth century European avant-garde and of romanticised scandal. Its themes of fantasy, melancholy, decadence, and unbridled sexuality appeal to an idea that prefigures Schnitger’s contemporary sense of picture building and post minimal sculpture. Baudelaire enters Schnitger’s work to stand for the idea of a privileged aesthete and trans-historical exile, and also as the manifestation of a particularly male gaze. In her triptych Lesbos, the figure of Baudelaire lurks in the spatially compressed background of the work like a curious monkey, overseeing a charged scene of variously undressed heroines - the poet's gaze immobilised by the theatre and rapture of female ecstasy. Other paintings in the show suggest the world of Baudelaire’s contemporaries, inverting the balance of their power structures and placing women firmly in control of their situations. Manet’s Olympia, and Le dejeuner sur l’herbe, appear as compositional tropes that Schnitger digests, and takes with her on a departure into her own imagination - overwhelming them with the excitement and joyful energy of her making.
Lara Schnitger was born in Haarlem, The Netherlands, in 1969, and lives and works in Los Angeles. Schnitger studied at the Koninklijke Academie van Beeldende Kunsten, The Hague (1987-1991), Academie Vyvarni Umeni, Prague (1991-1992), the Ateliers, Amsterdam (1992-1994), and the Centre for Contemporary Art, Kitayushu (1999-2000). Recent museum exhibitions include: Dance Witches Dance, Museum Het Domein, Sittard (solo) (2008), My Other Car is a Broom, Magasin 3, Stockholm (solo) (2005); Unmonumental: Falling to Pieces in the 21st Century, The New Museum, New York (2007); Eight Sculptors from Los Angeles, Hammer Museum, Los Angeles (2007); Red Eye: Los Angeles Artists from the Rubell Family Collection, Miami, (2006); Fantastic Politics, The National Museum of Contemporary Art, Oslo (2006); USA Today, Royal Academy of Arts, London (2006); and group exhibitions at The Powerplant, Toronto; Museum voor Modernen Kunst, Arnhem; PS1 Contemporary Art Centre, New York; Shanghai Biennial, Shanghai; Kunsthalle Basel, Basel; The Liverpool Biennial, Liverpool; and the Stedelijk Museum, Amsterdam. Lara Schnitger’s forthcoming solo exhibition at the Sculpture Center, New York, will open in September 2010.
www.modernart.net