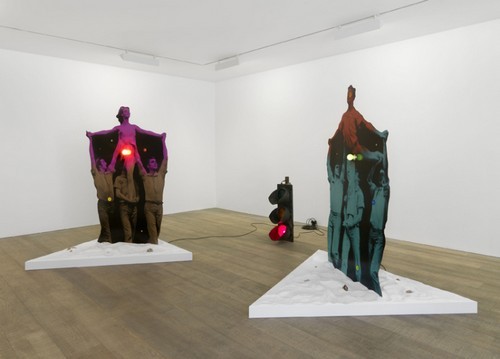 Modern Art is delighted to announce a solo exhibition of new work by German artist Lothar Hempel, Silberblick/Squint. This is his second solo show with Modern Art.
Lothar Hempel’s work inhabits a realm of dreamlike theatricality, full of many coexisting mystic possibilities. Hempel brings together a world of figures, shapes and colours in the stagelike expression of a certain attitude: graceful, cool, deliberate and poised – yet open and heartfelt. Often starting from ‘just so much as a feeling’, he weaves his material from movement, objects, and representations of performance. Hempel’s narrative associations and contradictions effect a state of mind between consciousness and dream. His exhibitions present us with an open scenario, full of possibility for meaning and interpretation.
In his photographs and in his sculptures Hempel incorporates found and collected images, often depicting dancers, performers, and societal transgressives. Images from Pina Bausch performances are recurrent, as are images of prostitutes, and cult heroes of late 20th century stage and screen. In selecting their qualities of gesture and character, he provides a release from their contexts and stories, liberates them from their histories and latent nostalgia, and infuses them with new life. These reborn characters come from a moment that is not quite of our own – yet while they appear slightly unfamiliar, they are recognisable, and can speak to us.
Lothar Hempel’s large new sculpture Verkehr (the German for ‘traffic’, and also a euphemism for sex) recaptures a double image of modern dancers as large photographic cut-outs, infused with spectral colour, depicted in a staged moment of euphoria and triumph. Hempel presents them frontally, propped-up on two separate plinths and triangles of unnaturally white sand, with an old traffic light nearby. There is a theatrical association, yet no one is exactly on stage. Hempel collapses the set, script and cast of a fantastic dance into sculpture. These sculptures are structured from two dimensional images in three dimensional space, and in this sense they almost undermine their themselves, revealing themselves as facades.
Some images, though, are different; more important than others. There is a famous issue of the German news magazine Stern that Lothar Hempel has owned since 1978, when he was 12 years old. On its cover the image of a teenage girl, Christiane F., stares out from behind the headline ‘Wir Kinder vom Bahnhof Zoo’; the subject of a tragic/romantic tale of teenage heroin addiction and prostitution. Her image and story has completely captivated Hempel since childhood: “I looked at her face for hours, studied every detail and listened to music at the same time, usually on headphones. Christiane and I were really close. There are a lot of things about the photo I understood, which became a part of me, but some things remain incomprehensible.” There is a continuity here, and amidst that, the discovery that this kind of memory and relationship can be embedded in a sense of identity and transformation. Christiane F’s youthful face stares out from the image on the cover, her eyes are not really looking at something, but looking through something. Hempel has remade this cover into a photographic work, colouring her eyes: one green, one yellow. It is a subtle intervention, but it is a gesture that seems to extract something - something irrational and mysterious. Hempel says “Now the time has come to revisit her. I want to make her face glow from within. She is my lighthouse.”
Lothar Hempel was born in Cologne in 1966, and studied at Kunstakademie Dusseldorf 1987-1992. He currently lives and works in Berlin. In 2007 Hempel’s work was the subject of the retrospective exhibition Alphabet City at Le Magasin, Grenoble. Recent solo museum exhibitions include Casanova, Douglas Hyde Gallery, Dublin (2008); Concentrations 42, Dallas Museum, Dallas (2002), and Propaganda, Institute of Contemporary Art, London (2002). Lothar Hempel’s work has been included in the recent exhibitions Heaven, Athens Biennale (2009), Le Song D’un Poete, Frac des Pays de la Loire, Nantes (2009); Beaufort 03, Triennial for Contemporary Art, Blankenberge (2009); 7th Gwangju Biennial (2008); Pale Carnage, Arnolfini, Bristol and DCA, Dundee (2007); Imagination becomes Reality. Werke aus der Sammlung Goetz, ZKM – Museum für Neue Kunst, Karlsruhe (2007). Lothar Hempel has exhibited regularly and continuously for almost two decades, during which time his work has been seen in exhibitions at many esteemed institutions, among them: the Venice Biennale; Tate Liverpool, ICA, London; Stedelijk Museum, Amsterdam; P.S.1, New York; Museum of Contemporary Art, Chicago; Portikus, Frankfurt am Main; Secession, Vienna; Centre Georges-Pompidou, Paris. During this exhibition at Modern Art, Lothar Hempel will be exhibiting a solo project ABC as part of Art Unlimited, Art 41 Basel.
www.modernart.net