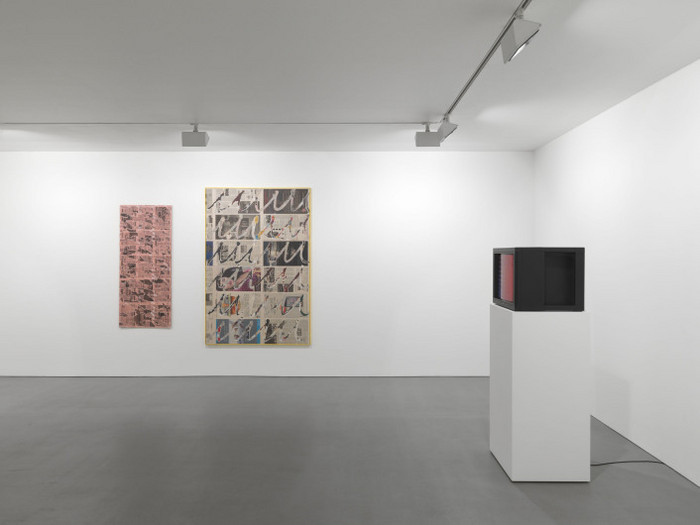 Stuart Shave/Modern Art is pleased to announce an exhibition of works by Nikolas Gambaroff, Raymond Hains and Jacques Villeglé. The exhibition brings examples of Nikolas Gambaroff's new work together in the suggestion of a conversation with related art historical antecedents. The use of materiality in all these artists’ work – the literal ripping and tearing associated with décollage – deals with the collection, division and conflict of visual information.
Jacques Villeglé was born in France in 1926. Since the late 1940s, Villeglé has worked to produce a substantial and singular body of work from found layers of ripped street posters. Doing little more than selecting and mounting them on canvas as paintings, Villeglé identifies compositions that reveal a conditioned way of seeing and a critical eye brought to bear upon the tasks of isolating both beauty and socio-political affect in the disorder of everyday urban life. Villeglé is widely considered a figure at the forefront of the twentieth century European avant-garde, whose work pioneered radical approaches to appropriative art making.
Raymond Hains was born in France in 1926, and died in 2005. Hains met Villeglé in the mid-1940s, and together they developed décollages made from found, torn street posters. Working together in the 1950s Hains and Villeglé gave themselves the label of ‘affichistes’, before becoming associated with the Lettrist and Ultra-Lettrist movements, and later counting among the founders of Nouveau Réalisme. In the mid 1960s Hains chose to distance himself from the Nouveau Réalistes, and unlike Villeglé, sought to continually reinvent his practice throughout the course of his life. Both Raymond Hains’ and Jacques Villeglé’s work have been the subjects of major retrospectives at the Centre Pompidou, Paris, France, in 2001 and 2008 respectively.
Nikolas Gambaroff was born in Germany in 1979, and lives and works in New York. His abstract works are made with a process of layering, gluing and tearing away newspaper in a language of expressive painting that is open to chance and the twin aesthetics of formal and socio-political gesture. Visual information and material is combined and revealed, proposing a position that muses lightly on the ideological supports that underpin painting and society-in-general. Nikolas Gambaroff’s work has been included in the exhibitions Time is Brain, New Jerseyy, Basel, Switzerland (solo, 2010); Nikolas Gambaroff, Michael Krebber, R. H. Quaytman, Blake Rayne, Bergen Kunsthalle, Bergen, Norway (2010); Knight’s Move, Sculpture Center, New York, USA (2010); Non-solo show, Non-group show, Kunsthalle Zürich, Zurich, Switzerland (2009); modern modern, Chelsea Art Museum, New York, USA (2009).
www.modernart.net