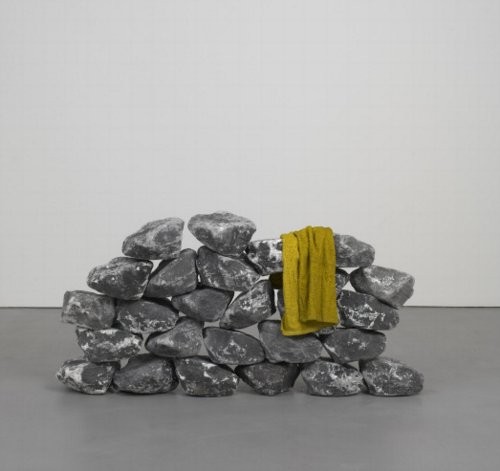 Stuart Shave/Modern Art is delighted to announce a new exhibition of work by Paul Lee. This will be the artist’s first solo show in Britain, and his first with Modern Art.
Paul Lee’s work is reticent and humble, born of a relationship between particular material forms and suggestive, unspoken narratives. His material selections commonly stand for a suggestion of interface between a person and the world: tactile objects that frequently associate with the facilitation of action and that are themselves activated by human contact. Towels, washcloths, and tambourines characteristically find their way into Lee’s work - objects that with slight manipulation and reconfiguration openly bear their material identities, yet as presented to us, become comprehensible only as sculpture or painting.
Lee’s vocabulary of forms approaches the style of a language, in which his thinking and phraseology stems from the processes of making, doing, and relentlessly working at a particular set of thematic ideas and evocative forms. The dynamic of his interrelationships is associative, rhyming and rhythmic, literal and concrete.
This exhibition at Modern Art presents a group of wall-based works derived from towels and tambourines. Towels, Lee’s foremost raw material, are worked by hand, dyed, painted, cut and reconstructed. His towel works exist in variant sets of forms: loosely referred to by the artist as ‘solids’, ‘negatives’ and other seemingly literal descriptions. These pieces all in some way propose and delineate an atmosphere of pictorial space. His tambourines are painted on and partially squared-up with small built extensions. Lee’s use of shape and flat even planes of colour recalls the visual identity of modern or geometric formal abstraction, but only in the sense that that association is already-there in the world. They come to be more by way of an exercise in allusion and tactile experience than as the illustration of style or concept. Muted and displaced, Lee re-forms and re-establishes these materials as aesthetic devices that express the possibility of extruding narrative and decoding meaning.
Paul Lee was born in London in 1974, and currently lives and works in New York. Paul Lee was artist in residence at the Chinati Foundation, Marfa, USA, in 2007, and graduated from Winchester School of Art, England, in 1997. Recent solo exhibitions include Lavender, Maccarone, New York, USA (2010); Peres Projects, Los Angeles, USA / Berlin, Germany (both 2008); and Chinati Foundation, Marfa, USA (2007). Paul Lee’s work was included in the exhibitions Everynight, I go to sleep, Modern Art, London (2010); Parallel, Bortolami Gallery, New York, USA (2009); Between Beach Ball and Rubber Raft, Contemporary Art Museum, St. Louis, USA (2009); Eliminate curated by John Waters, Alberta Merola Gallery, Provincetown, USA (2007); and The name of this show is not Gay Art Now, curated by Jack Pierson at Paul Kasmin, New York, USA (2006).
www.modernart.net