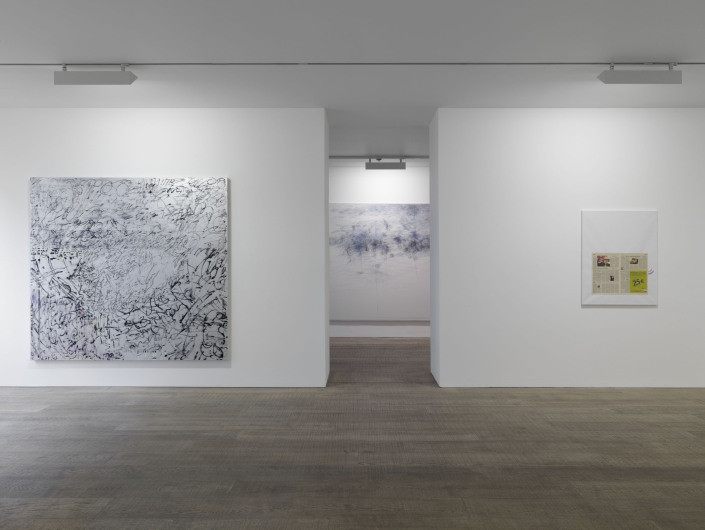 Stuart Shave/Modern Art is pleased to announce an exhibition of paintings curated by Raphael Rubinstein.
In his recent article ‘Provisional Painting’ (Art in America, May 2009), Raphael Rubinstein sought to identify and assemble a range of painting practices, historic and contemporary. In this exhibition the focus is exclusively on the contemporary, as the writer puts his critical ideals to the test with actual art works.
The greatest straightness looks like crookedness. The greatest skill appears clumsy. The greatest eloquence sounds like stammering. - The Tao Te Ching

Provisional paintings are those that might appear unfinished or incomplete; that court intentional awkwardness, physical fragility and instability; that reject the display of conventional skills; that discover beauty in the most unassuming materials; that sometimes grapple with painting’s ‘impossibility’. Their lineage includes Joan Miró’s anti-paintings of circa 1930, Giacometti’s endless obliterations and restartings of his painted portraits, the early work of Sigmar Polke, and the spray-painted abstractions of Martin Barré. The theoretical underpinnings range from Samuel Beckett to Gilles Deleuze and Félix Guattari’s Kafka: Toward a Minor Literature.
Recently, many artists - painters and sculptors alike - have embraced various kinds of provisionality. This exhibition brings together some younger figures as well as others who have been working in related modes for many decades. Richard Tuttle has been pursuing a poetics of unassuming beauty since the late 1960s, contributing crucially to the language of painting while eschewing its conventional trappings; Julian Schnabel is represented by a recent work in which a rain-stained lampshade becomes the occasion for meditation on accident and intention, seeking, as Elizabeth Taylor once said, to “give the maximum emotional effect with the minimum of visual movement.”
Raoul De Keyser’s concise exposition of painterly ambiguity of image and form is, as so often with this artist, a seemingly casual composition that rewards close, careful attention. Pinning passages of messy sfumato upon stray advertising layouts, Albert Oehlen deposes the medium, sneaks up on grand painting before it can be frozen as a mere masterpiece. For Michael Krebber, no aspect of the medium is taken for granted as the canvas becomes a kind of sublime flypaper, fixing individual gesture and media grabs.
Several painters investigate alternatives to the paintbrush: for Angiola Gatti, the preferred tool is a humble ballpoint pen employed to carve out collapsing spaces; Cheryl Donegan wields a knife to slice into glittering metallic tape in her shredded, stuttering paintings. Peter Soriano’s conceptual wall pieces track their own making, reflecting on the artist’s every decision and how it might have gone differently. If Sergej Jensen refrains from cluttering his stretched fabrics with even a single stroke, Jacqueline Humphries goes to the other extreme, ceaselessly adding to and obliterating her suspended calligraphy. Richard Aldrich, who insists that for him painting is the opposite of ‘impossible’, offers four isolated images using four distinct techniques and four representational languages: the syntax of looking we use to reconcile them leaves meaning itself provisional.
Provisional painting is not about making ‘last paintings’, nor is it about the deconstruction of the medium. What the various works in the show share is neither style nor content, neither techniques nor materials, but rather a profound willingness to suspend closure, to leave painting open. Like Roland Barthes’ ‘Neutral’, they outplay the paradigm of their medium, and continually baffle it.

Raphael Rubinstein is a New York-based writer and critic. From 1997 to 2007 he was a senior editor at Art in America, where he continues to be a contributing editor. He is professor of critical studies at the University of Houston and is also on the faculty of the Art Criticism and Writing MFA Program at the School of Visual Arts in New York.
www.modernart.net