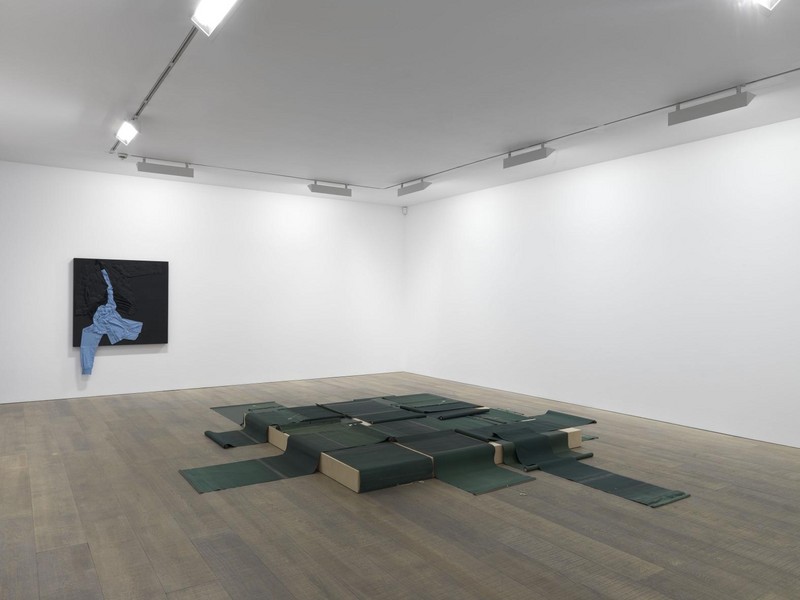 Stuart Shave/Modern Art is delighted to announce an exhibition of new work by Tom Burr. This will be the American artist’s third solo show with Modern Art.

Availed with the clarity of minimalist sculptural style, and with the languages of indexical representation, Tom Burr’s work gives embodiment to abstract shape - imbuing his forms with suggestions of character, a feeling for emotional condition, and an absence of presence. Burr appropriates found objects, images and articles of clothing into his work, drawing on objects’ capacity to bear meaning and intuitively relate to a given set of ideas, particular intellectual fashions, and certain moments in time. These sensitively selected and arranged things help us to approximate a feeling for character and cultural attitude in much the same way that we all come to defined by the things that we choose to be surrounded by, and by the things that we choose to associate with. As kinds of indexical portraits and self-portraits, his sculptures could be read as portraits of personality, or maybe rather as an idea of portraits of an idea of personality. Burr’s work, at least in part, could be seen to hinge on a received idea of minimalism. In one sense this is to do with Minimalism proper, say as a particular reference to an art-historical moment and a set of specific practitioners’ work in the fields of sculpture and theory. In another sense, this may have to do with minimalism as a more popularly understood idea of aesthetic puritanism: a style signified by simple shapes, cool semi-industrial surfaces, a monochromatic palette, and austere geometry. Against this backdrop of a cool inanimate emptiness, Burr reasserts qualities of character and a romantic feeling for narrative and humanity. Many of his sculptures recall what might be the ruins or remnants of performance and theatre - the shape and volume of his work often adopting and adapting the manner of architecture and designed interior space. Burr light-handedly appropriates the suggestions and spatial cues of the kinds of lifestyle venues that often specialise in channelling and controlling social and sexual identities, and the way that these kinds of structures effect and manipulate the interactions of people, the way we reveal ourselves to the world, and the assertion of the things that surround us.

This exhibition at Modern Art presents a series of new works that emphasise quite definite sculptural notions of character and attitude. A series of wall-based works are made from grey blankets wrapped, rumpled and pinned over wooden box-shaped panels. The blankets dress the form and in some way impersonate paintings, but with a volume and density that is destined for sculpture. The emotional pitch of these paintings is sombre and heavy, with a mood that finds expression in what the artist describes as the kind of sleepless and restless activity of tossing and turning that transforms a freshly made bed into an unmade one. Throughout this show is a feeling for concrete and metaphoric texture: roughness trying to be smooth, something high acting low, a sense of things ‘walking on both sides of the street’. Burr finds formal and emotional correspondences in the protective purpose of dressing an object. Two freestanding sculptures in this show stage open and expansive arrangements within the galleries, unfolding over the flatness of the floor like a painting spilled on its back. Their sense is of material flatness and repose, composed of muted colour and faded surfaces. Green canvas window shades fill the space of one large sculpture, pinned, overlapping and draped, speaking in hushed tones of an emotional condition, a certain attitude, and a quiet character. Another sculpture incorporates a special edition copy of October magazine from 1982, a green leather trench coat, and a vintage Fassbinder poster. The palette of this work and its references to the German filmmaker Fassbinder help conjure a moment of intellectual fashion from the early 1980s (when Burr was a student, and when Fassbinder died), and associate ideas about the figure of an artist that muddy distinctions between private realms and professional exactitudes.