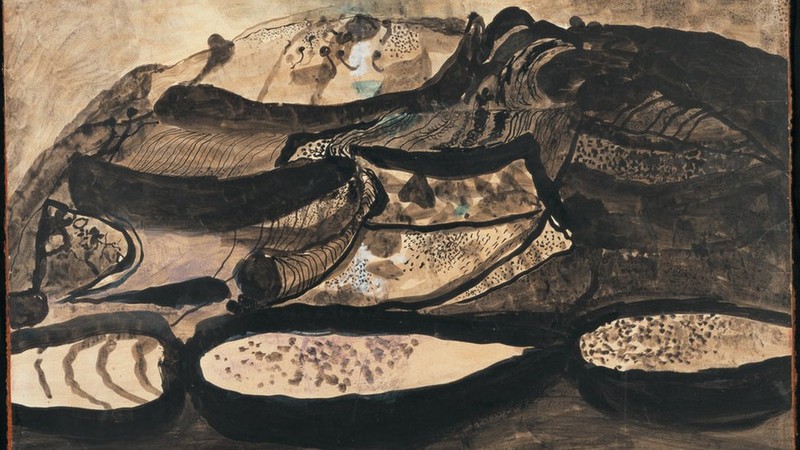 This winter, Modern Art Oxford presents a collection of works on paper by British artist, Graham Sutherland. Curated by 2011 Turner Prize nominee, George Shaw, An Unfinished World is a reflective exploration of the lesser-known work of one of the most compelling artists of his generation.
The exhibition concentrates on Sutherland’s early Welsh landscapes from the 1930s, works created during his time as official WWII war artist, and after his return to Pembrokeshire in the 1970s.

Far from traditional studies of landscape and environment, these works not only depict but also exude a world that is as dark as it is magical, as elusive as it is recognisable. Strangely bereft of human life, the works navigate the real and imagined; where country lanes loop into each other, horizon lines fold into foregrounds, and nothing is as it seems.

George Shaw presents these works through the lens of a contemporary painter, describing them as ‘a lament to the passing and changing landscape, a monument to the earth itself’. He adds, ‘the exhibition shows us Sutherland as an artist as much rooted in the past as in the world before him – a world forever unfinished’.
An Unfinished World brings together for the first time over eighty rarely seen works on paper from public and private collections across the UK.

An Unfinished World – the publication to accompany the exhibition includes an introduction by Michael Stanley and texts by George Shaw, Brian Catling, Rachel Flynn and Alexandra Harris.

Graham Sutherland Exhibition Circle
Don't miss the short film by John Rolfe playing in the Basement, featuring interviews with George Shaw in the galleries at Modern Art Oxford and his thoughts on some of the works in the Graham Sutherland exhibition. Free, just drop in.

Graham Sutherland
Graham Sutherland (b. 1903, London, d. 1980), painter of imaginative landscapes, still life, figure pieces and portraits, abandoned a railway engineering apprenticeship after a year and studied at Goldsmiths College School of Art 1920–5, where he specialised in engraving and etching. Formative influences on his early work were Blake, Samuel Palmer, Turner, Paul Nash and Henry Moore. He exhibited at the N.E.A.C. 1929–33 and with the London Group from 1932 (member 1936–7), experimenting with painting in oils from 1930 until, in 1935, the year after his first visit to Pembrokeshire, he decided to become a painter. As an Official War Artist 1941–4, Sutherland painted scenes of bomb devastation and of work in mines and foundries. He also painted the portrait of Somerset Maugham in 1949, the first of a series, which includes Lord Beaverbrook, Sir Winston Churchill and others. He completed the designs for the Coventry Cathedral tapestry, ‘Christ in Glory in the Tetramorph’, between 1954 and 1957 (installed 1962). He also designed posters, ceramics, book illustrations, and ballet costumes and décor for ‘The Wanderer’ in 1940. He was awarded the Order of Merit in 1960.
George Shaw
George Shaw (b. 1966, Coventry, currently lives and works in North Devon) grew up in Tile Hill, a post-war housing estate on the south side of Coventry. He gained a BA from Sheffield Polytechnic in 1992 and an MA from the Royal College of Art, London, in 1998. His solo exhibitions include The Sly and Unseen Day, BALTIC Centre for Contemporary Art, Gateshead and South London Gallery (2011), Looking for Baz, Shaz, Gaz and Daz, VOID, Derry (2010), Woodsman, Wilkinson Gallery, London (2009), The End of the World, Galerie Hussenot, Paris (2008), Poets Day, Centre d’Art, Contemporain, Geneva (2006), Ash Wednesday, Wilkinson Gallery (2005) and What I Did This Summer, Ikon Gallery, Birmingham (2003). George Shaw is one of four artists shortlisted for the Turner Prize 2011. Work by the shortlisted artists will be shown in an exhibition at BALTIC Centre for Contemporary Art, Gateshead, opening on Friday 21 October 2011. The winner will be announced at BALTIC on 5 December 2011.
www.modernartoxford.org.uk