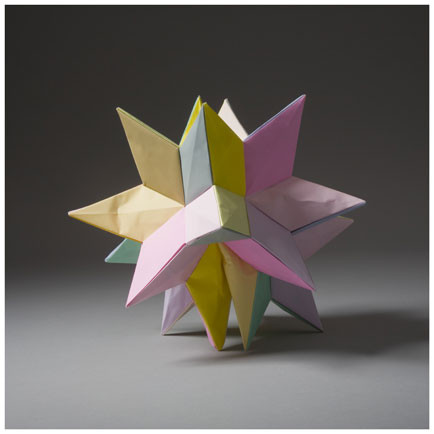 Modern Art Oxford presents Teacher of Dance, the first major UK exhibition of the Seoul- and Berlin-based artist Haegue Yang. Yang has developed a distinctive practice of colourful and sensorial installations and sculptures that occupy the spaces where public and private meet. Predominantly using domestic materials, Yang discloses narratives, individual portraits and her own sentiments, reflecting the balance of research and intuitive enquiry that underlies her practice.
The exhibition, whose title references the spiritualist thinker and teacher G. I. Gurdjieff, is guided by an interest in movement and the role it plays in the formation and experience of Yang’s work. It includes not only major past works but also newly conceived pieces. Yang has been commissioned to create a new Venetian blind installation, which, in a departure from previous works, visitors can move underneath and within. Alongside, work in a variety of media from the past decade is exhibited, including the series Light House (ongoing since 2008), intricately folded cardboard sculptures fashioned from light bulb boxes, and Non-Indépliables (Non-Unfoldables), 2006 –11, drying racks wrapped in vibrantly coloured fabric and knitted material, which transform a functional and intrinsically foldable household item into a figurative yet fixed sculpture.
To coincide with the exhibition, Modern Art Oxford will produce a fully illustrated catalogue in collaboration with the Aspen Art Museum, Colorado, focusing on Yang’s exhibitions at the two institutions. It contains two major essays by Professor Julian Stallabrass, Reader at the Courtauld Institute, and Professor Anne Wagner, The Henry Moore Foundation Research Curator at Tate. The catalogue also contains a text by Heidi Zuckerman Jacobson, Director and Chief Curator, Aspen Art Museum, and an interview with Haegue Yang by Emily Smith, Curator, Modern Art Oxford, and a biographical text by Katharina Schwerendt. The book has been developed in a close collaboration between the designer Manuel Raeder and Haegue Yang
www.modernartoxford.org.uk