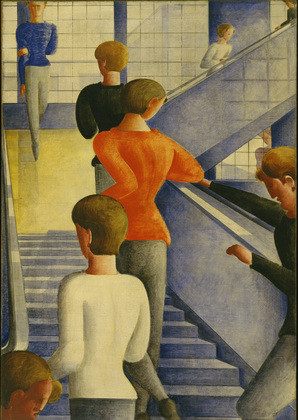 
This survey is MoMA’s first major exhibition since 1938 on the subject of this famous and influential school of avant-garde art. Founded in 1919 and shut down by the Nazis in 1933, the Bauhaus brought together artists, architects, and designers in an extraordinary conversation about the nature of art in the age of technology. Aiming to rethink the very form of modern life, the Bauhaus became the site of a dazzling array of experiments in the visual arts that have profoundly shaped our visual world today.

The exhibition is organized by Barry Bergdoll, The Philip Johnson Chief Curator of Architecture and Design, and Leah Dickerman, Curator, Department of Painting and Sculpture.

Presented in cooperation with the Bauhaus-Archiv Berlin; the Stiftung Bauhaus Dessau; and the Klassik Stiftung Weimar.

The exhibition is made possible by HyundaiCard Company.

Additional funding is provided by Anne and Kenneth Griffin, Jerry I. Speyer and Katherine G. Farley, and Robert B. Menschel.

The accompanying publication is made possible by The International Council of The Museum of Modern Art.
www.moma.org