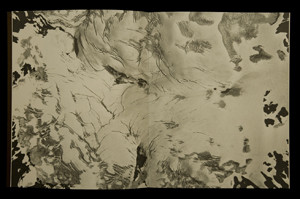 The Lewis B. and Dorothy Cullman Education and Research Building


This exhibition considers a group of artist's books, published from the late 1960s to the present, that reveal a fascination with elemental, unexplored, and overlooked spaces. Drawn from the Library of The Museum of Modern Art, the works on view span two generations of art and thought concerned with natural phenomena, bringing the viewer face to face with a natural world still beyond human control. Featured artists include Doug Aitken, Vija Celmins, Tacita Dean, Hamish Fulton, Roni Horn, Richard Long, Bruce Nauman, Gerhard Richter, Ed Ruscha, and Tadanori Yokoo, among others.
This exhibition features a group of artists' books published since the late 1960s that share a fascination with contradictory information, elemental, unexplored, and overlooked spaces, and the narrative capacity of the book form. These works, selected from the collection of The Museum of Modern Art Library, closely observe elements of nature that lie at the periphery of human consciousness—dust, icebergs, a patch of sky, countless stars or stones, and endless waves. Incalculable portions of an indefinite whole, these aspects of nature evoke the enigma of a physical world largely beyond human control.
The artists bring their various individual working processes and mediums to the sequential and narrative format of the book. Uniting image and text, they have slowed, stilled, or altered the time-based or systematic approaches of photography, video, and film, or shifted the observational and notational techniques of drawing, painting, sculpture, and printmaking. Assuming the impersonal authority of a textbook or atlas, these artists' books conjure—and subvert—the appearance of scientific publications from diverse fields, including natural history, astronomy, and geography, proposing logical systems only to unravel them.
Offering minutely detailed views of a segment of seemingly boundless space, the books distantly echo the expeditionary literature of bygone centuries, in which terra incognita and geographical and scientific frontiers loomed with the most power. Spanning forty years of art and ideas, they project a sometimes studied consciousness of the ongoing force of natural phenomena, simultaneously suggesting the limits and the possibilities of modern observation and documentary techniques.
The exhibition is organized by May Castleberry, Editor, Contemporary Editions, The Library Council of The Museum of Modern Art.
www.moma.org