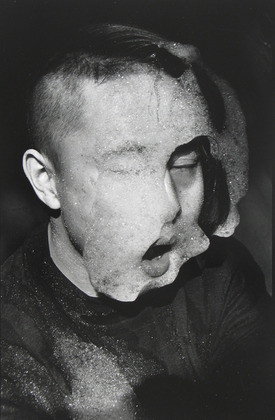 The relationship between photography and performance has become distinctly more complicated since the 1960s, when artists increasingly began making art that was transient and improvisational. For the most part, performances are intended to be experienced live, in real time, with photography playing an ancillary function in recording them. This exhibition, however, considers performances made expressly for the camera, resulting in photographs that function as independent, expressive pictures. Drawn from the Museum’s collection, the works included in Staging Action feature performances, oftentimes executed in the absence of a public audience. At the center of these pictures is a performer (the artist, or his or her proxy) posing or enacting actions conceived in front of the photographic lens. Many artists experimented with the camera to test the physical and psychological limits of the body. Others enlisted it as an accomplice in acts of political dissent. The exhibition presents the work of pioneering figures such as Bas Jan Ader, Günter Brus, VALIE EXPORT, George Maciunas, Ana Mendieta, Bruce Nauman, and Mieko Shiomi, as well as that of subsequent generations of artists, including Ai Weiwei, Matthew Barney, Laurel Nakadate, Lorna Simpson, and Robin Rhode. Staging Action attests to the myriad ways in which photography, with its ability to both freeze and extend a moment in time, goes beyond mere documentation to constitute performance as a conceptual exercise.