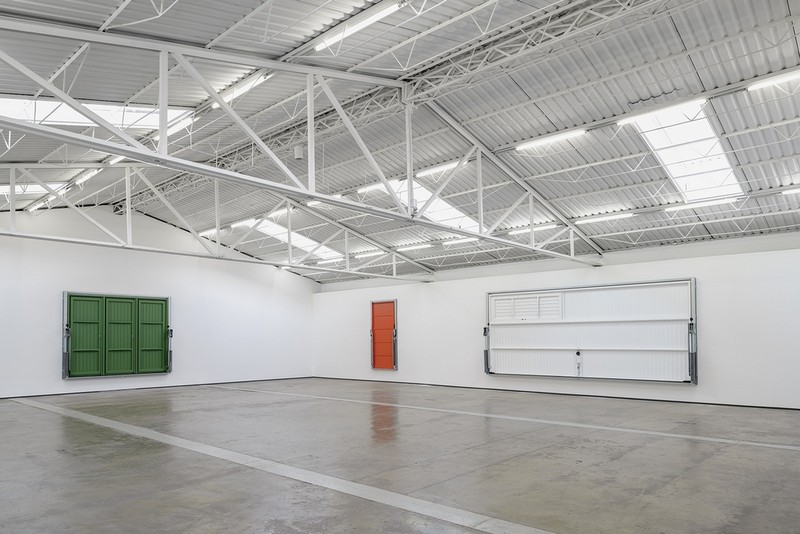 On May 3, 2016, the gallery PROYECTOSMONCLOVA inaugurates dre omins, the first solo exhibition in Mexico and Latin America of acclaimed German artist Andreas Slominski. It is worth mentioning that Slominski will likewise be presenting two major projects in Europe simultaneously to his show in Mexico: the museum exhibition Das Ü des Türhüters [The O of the Door] in the distinguished institution Deichtorhallen, Hamburg, Germany, as well as the outdoor installation Rüben, as part of the Krauthügel Art Project, Salzburg, Austria.
Slominski became internationally known with his traps, which –effectively being placed in the exhibition space– are expanding the concept of sculpture.
«Andreas Slominski’s primary concern since 1984 can be described very broadly as field research –the aesthetic exploration of everyday perceptions of the most incidental kind. There is often something insidious, and also something impish, in the ordinariness and inconspicuousness of the objects he selects. They consistently undergo a reversal of function, context and content. [...] All of Slominski’s works can be “traps”, figuratively speaking. In the course of the years, the “trap” has virtually become a generic term for the artist. It has become the solution in his search for a personal form of artistic expression; it has become his artistic strategy.»*
In dre omins, Andreas Slominski will present a series of garage doors conceived exclusively for PROYECTOSMONCLOVA. The title of the show gives away the artist’s conspicuous sense of humour, as he composed it by extracting the central syllables of his own name, but it also unveils a critical turn towards the artist figure and his relation to his own work. These garage doors negate the notion of the ready-made. Although they derive from functional objects, they manage to shake off the term, given their personalised unique formal characteristics manifest in colour, design and absurd details.
Fixed on the wall by their front side, hence presenting their backsides to the visitors, Slominski places the audience inside the garage, therefore revealing one of his most habitual forms of expression: the trap. The gallery space itself, with its history, meaning and mechanisms, thus suddenly becomes the subject in question and the visitor is somehow trapped in a closed space with no way out.
In history, garages often became the sites of legendary events: they were the basic units of gigantic firms –like Apple– and also of the success stories of many famous bands. The garage door can be read as a metaphor for a mystic site of retreating, hatching and experimenting, but it could also become a comment on painterly traditions and be seen as a large-scale monochromatic tableau.
Andreas Slominski (Meppen, Germany, 1959) lives and works in Werder-Havel, Germany. He studied at the Hochschule für Bildende Künste (HFBK), in Hamburg, from 1983 to 1986. After a professorship in Karlsruhe, he became the successor of Franz Erhardt Walther, at the HFBK, in 2004. Slominski has received numerous awards, including the Karl Ströher Prize (1991), the Sprengel Prize (1995), the Aachen Art Prize (2004) and the Lichtwark Prize (2013). Following important solo exhibitions in the Deutsche Guggenheim, Berlin (1999), the Fondazione Prada, Milan (2003) and the Serpentine Gallery, London (2005), Slominski had his so far most comprehensive exhibition in the Museum für Moderne Kunst (MMK), in Frankfurt (2006-2007), featuring works from the last 20 years. His work is part of noteworthy collections such as the Solomon R. Guggenheim Museum in New York, USA, and the Tate Modern in London, UK, just to name a few.
* Mario Kramer: The Differing Perspectives of a Mole and a Giraffe. On the works of Andreas Slominski in the MMK Collection, in Kittelmann, U., Kramer, M., Andreas Slominski, MMK Museum für Moderne Kunst Frankfurt am Main, Verlag der Buchhandlung Walther König, p. 149, Germany, 2007.
www.proyectosmonclova.com