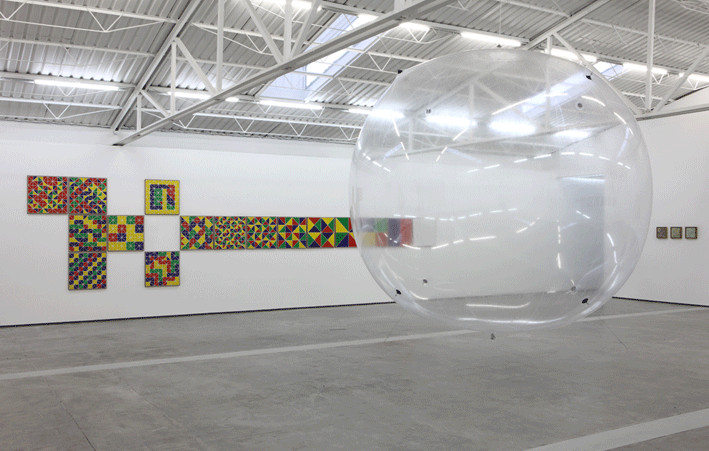 Nothing is new, neither is anything old.
-Robert Smithson, 1967

The works on show here are for the most part drawings made up of horizontals, verticals, diagonals, and sometime even curves, mapping areas that are often square and outlining multicolored, unlikely geometrical territories.
Two series confront each other: one in exponential expansion, the other organic; one reasonable and coldly logical, the other random and deliciously capricious. In a seemingly limitless interplay of combinations, Eduardo Terrazas explores the possibilities provided by compasses, rulers, acrylic paint and wool. Ahead of its time in many ways, his oeuvre—largely given shape during the 1970s—abundantly prefigures the paths taken by younger artists since then. It should be pointed out that he has long been a globetrotter—since well before art nomadics became a religion—and that he was quick to grasp the creative potential of Mexico’s streets. Inspired by art movements seen and absorbed during his travels abroad, his work is very much a part of what the 1960s were fomenting. While there are patent influences from Argentinian concreto, Brazilian neoconcreto and Op Art, he did not turn a deaf ear to the provocative siren song of mid-60s psychedelia—at the very least he produced his own version of its chromatic consequences.
One particular encounter would lead to symbiosis between these passions for the structural and the vernacular: in 1971 Eduardo Terrazas began working with Santos Motoaaopohua de la Torre de Santiago, and over a period of four years they produced an extensive series of colorful geometrical compositions using wool fixed to wooden boards with Campeche wax.
Resurfacing unpredictably and at irregular intervals, the Eduardo Terrazas oeuvre makes light of the demands of time.