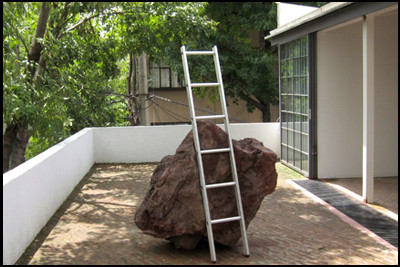 Two Ways to Fall, the title of this exhibition and one of the works in it, is taken from a country song about falling in and out of love. The show addresses a sense of balance between moving and falling forwards or backwards in time as well as the own past and possible future of materials.

Two Ways to Fall (2011) is suspended from the ceiling, balancing two elements. Both organic and weathered by time, having lost and gained weight, the two objects meet at this specific point in time.

Outside on the terrace a ladder is leaning against a large volcanic rock. Beginning Happening Fig.8 (2011) continues a recent sculptural series by Marie Lund in which domestic objects are slightly carved into rough stones. The mineral and prehistoric material in relation to cultural and functional objects indicates human scale and suggests figurative shapes that could appear within the solid material.

This exhibition looks at the permanence and transformation of objects; the way materials are modified by human in the shaping, carving or constructing of an object, or how they are weathered by time. Bump and Hollow (2011) looks at a surface between the inside and the outside of the object, and the inner and outer shape of the space it is placed in. A bronze object that has been placed underneath the gallery floor is only indicated by its own shape: the bump it creates when pushing itself into the space.

The exhibition also includes two texts by Francesco Pedraglio from his ongoing series of writings Theory of Budapest (Fragmented entries of an object's diary).
www.proyectosmonclova.com