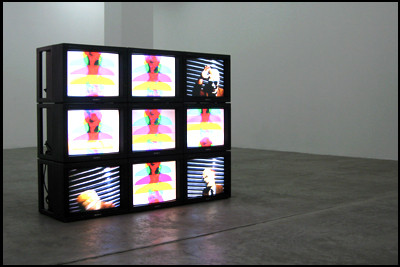 Neither of the two works included in Early Color Video Tapes was made in the early stages of the artist`s career. They both question, rather, the validity of artistic inquiry through time.

All That Color Is Making Me Blind is a video essay about the construction of meaning through the use of putatively obsolete aesthetic formats and strategies, as well as an investigation into the collapse and displacement of time as a means of production.

The fictional story of All That Color... presents an artist`s envisionthe the downfall of video art ideals as being transformed and problematized by commercial television broadcasting. The piece portrays a decade of interventions by artists in television broadcasting, making use of antagonistic techniques from experimental video that were debated through the seventies and eighties as valid strategies for the use of video as an art form. All That Color... is a video pastiche, a time capsule of both television and artistic inquiry.

Sing Like Baldessari (Freestyle) is a video that simulates a karaoke version of Baldessari sings Lewitt -- a 1972 piece by the Los Angeles artist in which he sings Sol Lewitt's 'Sentences on Conceptual Art.'
www.proyectosmonclova.com