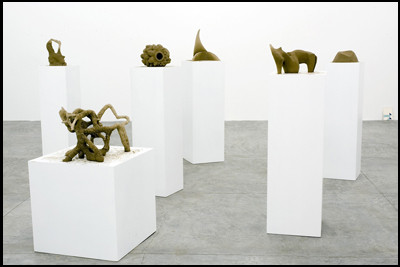 Beier and Lund (Denmark, 1975 and 1976) base their collaboration on an interest in observing the mechanisms by which individuals organize themselves into groups, as well as an analysis of social dynamics and the many situations from which they are abstracted. Recently the pair has concentrated on generating actions similar to rituals. With these they examine the way history assumes a form that eventually changes or disappears; these pieces suggest the absence of the past, the activity of the present and the active potential of the future for the subjects or the situations to which they refer.

For example, their observations of their parents' generation brought the artists to produce Reminiscence of a Strike Action (2007), in which they invited a group of revolutionaries that had been active at the end of the 1960s to close their eyes along with the rest of those present. The situation was documented on video, producing a panning close-up that shows the efforts of the participants – including Beier's parents – to carry out a task as long as they were assured that everyone else was doing the same. Faced with the participants' expressions – who are perhaps reflecting on their ideals and where they stand now – the spectator experiences a special empathy with these visionaries who fought to change society and its operation, since those changes had been demonstrated to be vulnerable to the passage of time.

A fundamental part of the formation of history is the elaboration of collections, and what is then done with them. The loss, misplacement or oversight of some pieces are factors that, in the present, reshape the reading and understanding of the past. A recent example is the mysterious disappearance of a massive steel sculpture (weighing 38 tons), created by Richard Serra and part of the collection at the Queen Sofía Museum of Contemporary Art in Madrid. A replica was subsequently produced for the institution as a replacement.

Beier and Lund's understanding of these historical events plays a crucial role in the formation of their work. (Calling) Loss and Cause (2009) consists of a series of clay replicas of sculptures that have disappeared from various collections. These exist with the understanding that they will have to be destroyed and left in pieces whenever the originals reappear. The piece emphasizes certain aspects of cultural heritage and property, challenging both the importance of universal value as opposed to private property, and the responsibility inherent in the very act of collecting.

The Points (2008) present a collection of objects that have been re-signified and carried to another level of abstraction. It consists of a series of collages that were conceived through a particular selection of books, whose covers bear abstract designs. The geometrical figures have been carefully cut out and transplanted onto surfaces with the same dimensions as the books from which they were removed, thus carrying the very abstraction of their language even further. The pieces carry the titles of the books from which they were extracted. An important precursor to this piece comes from the early twentieth century: Suprematism. Malevich, the movement's founder, equated feelings, ideas, emotions and everything whose existence was undeniable but which nevertheless lacked a material medium with the non-existence of pure, geometric forms in nature. These pure, supreme forms were subsequently re-used and charged with new meaning by the constructivists, and used in the propaganda of the Bolshevik government.

In The Points we can see that all of the books which have been divested of their covers – books from all disciplines (sociology, politics, economy, linguistics, law, etc.) – share the common purpose of giving form to thought while at the same time educating society. The Points isolate the forms of the covers, letting them – in a sort of return to Malevich – provide their own proof by demonstrating the abstract nature of language.

The series The Archives (2008) consists of an intervention into a collection – still in an active process of acquisition – of vintage posters promoting peace and solidarity. The posters have been folded in half horizontally within their respective frames, thus obscuring their own content, which shows the intention of some lost cause. What once showed a potent political message has fallen, disappeared under its own weight. Only the tenuous reflection of its colors through the paper or the sides of the fold have been allowed to escape.

There is a factor of time in the work of Beier and Lund, which gives a certain particularity to the origin of their pieces. Both The Archives and (Calling) Loss and Cause are works that emerge from reflection on a historical moment. Nevertheless, the artists have also used the duration of their exhibitions as a frame to carry out some of their pieces.

For a 2008 show in Tokyo, Beier and Lund instructed the gallery in question to leave all correspondence that arrived during the period of the exhibition unopened. All the Best (2008) was presented as a small pile of letters and printed matter on the floor at the entrance to the gallery. Each day the arrival of new mail fed the piece, a gesture toward the accumulation of time.

For Autobiography (If these walls could speak) (2009) the artists made use of history within the physical space of the gallery itself in order to define the form of the piece. Drawing from the memories of the gallery's staff and following their indications, Beier and Lund sought out all of the traces of nails and screws in the walls of the gallery, which had been used to display work from previous exhibitions. Although it deals with very recent history, the execution of this piece is similar to the work of an archaeologist. Drawing from memories and physical remains, Beier and Lund delicately excavated around the marks, unveiling the holes, and revealing the passage of time, effort and labor in the elaboration of a new piece: a subtle drawing of points across the walls, and the dust that has fallen to the floor.

Their fascination with the relics of an era, indicating poetically that any visionary movement is condemned to be consumed, assimilated and ultimately forgotten, makes Beier and Lund's work meaningful in our time. The work of these artists indirectly opens the possibility of reflections on and inquiries into our social and political practices. Perhaps it is in the time and space of art where these ideas can still exist, in their purest form.