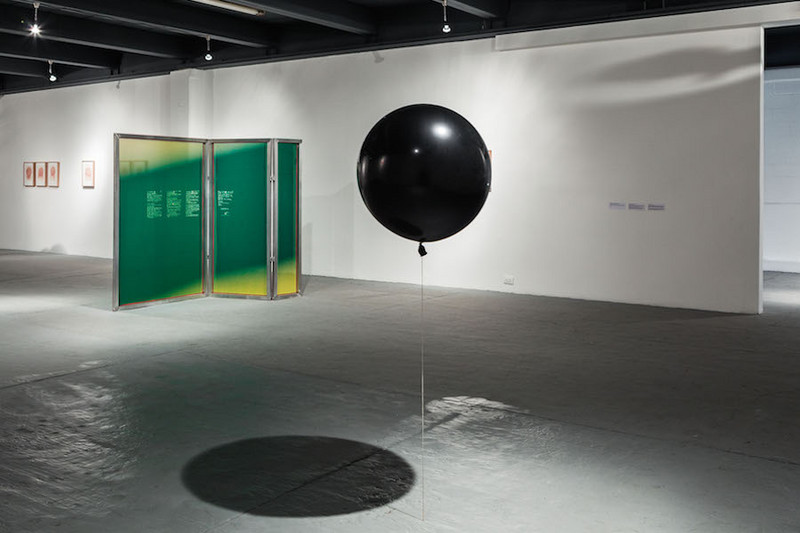 1. Ryan Gander and Mario García Torres
We revisit everything we ever imagined and the only way in which we could materialize it (Night and day), 2009-2015
Two images shown side by side, one framed under clear plexiglass and the other beneath tinted plexiglass, depicting three tiles levitating at waist height. The images show an installation view of the David Robert’s Foundation exhibition Sculpture of the Space Age (an exhibition described in J. G. Ballard’s short story The Object of the Attack).

2. Ryan Gander
Full Disclosure – Cover Letter, 2011-2015
An artwork by Mario García Torres from 2011 in the form of a slide show of the artist arranging a bouquet of flowers, with subtitles that make up a letter in which he proposes himself as a potencial director of the Kunsthalle Bern. This artwork, gifted freely, was destroyed by Ryan Gander by the means of punching holes into the slides. The slides of which are then shown alongside a framed Honorary Doctor of the Arts Certificate awarded to Ryan Gander in recognition of his outstanding achievement as an internationally acclaimed artist in the field of conceptual art, over which the artist has written a letter to Mario García Torres on the subject of Positive Jealosy.

3. Ryan Gander and Mario García Torres
The unbearable idea that actions invariably result in consequential actions, or How to make a movie script write itself, 2015
A video produced from stock footage that in the near future will possibly be used in a whole different context and seen in a whole new light, displayed on a Volumex monitor shown alongside a script of an anonymously-written printed tutorial explaining how to write a script. 2′ video and 14 letter size pages.

5. Ryan Gander
She walked ahead, leading him through a blizzard of characters, 2008
A two thousand word text written by an anonymous ghostwriter originally commissioned by the artist Mario García Torres, to be used in the performance I am not a flopper or..., 2007, but ultimately unsettled, unpublished and unwanted, which brings to life the fictional character Alan Smithee, pasted directly in a wall which was immediately afterwards re-plastered.

6. Ryan Gander
Analytical Playmaking – Agile Thinking, 2011-2015
An unfinished plasterboard wall is prepared by Mario García Torres as a background for an unknown responsive intervention by Ryan Gander. Inserted into the wall is a previously existing object made from a plastic sheet wrapped in insulation tape. The object resembling an ‘illegitimate yet unidentifiable package’ contains objects and articles from the artist’s collection that have been categorized on the theme of ‘the illegitimate and the unidentifiable’. Conceived as a work titled Damaged Goods – (Alchemy Box #30) in 2011, the package is shown alongside a rubdown transfer text disclosing a description of the objects within the package.

7. Mario García Torres
I am not a flopper or..., 2007-2015
Copies of a stage script for a one-act monologue written by Allen Smithee (a filmmaker, a pseudonym, an artist, a story, an argument, a failure) printed on a ream of paper presented in a cardboard box, one of which was used by the artist to give life to the movie director by the means of a performance during the opening of the exhibition.

8. Mario García Torres
We are window openers after all, 2014-2015
A vastly enlarged photograph rendered as wallpaper, taken by Ryan Gander of an exhibition by Mario García Torres made with the purpose of using it as the background for an unknown responsive intervention by Mario García Torres. The wallpaper is installed in a storage area turned into an interrogation-type chamber, alongside a number of mirrors and objects that imply a mutual analysis of the artists modes of operation, for example the measurements of the glass pane being defined by colliding all-two dimensional works made by Ryan Gander to date.

9. Mario García Torres
Full Disclosure – In front of you so to speak, 1985 by Aston Ernest, 2011-2015
A grey-painted wood table on which a slide show of adapted images from the artwork. In front of you so to speak, 1985 by Aston Ernest, 2011, by Ryan Gander, is shown. This artwork was gifted by Ryan Gander freely to Mario García Torres to destroy, amend, correct, clarify, keep or to do with whatever desired for the purposes of the production of a new artwork for the exhibition. The adapted slide is shown alongside a carbon copy version of Blood Fountain by Vivi Enyko, with copy-edit notes by Oscar Neuestern; five table tennis balls found after a garden table tennis game between Vivi Enyko and Aston Ernest (believed to be related to the origin of their work A Physical Discussion) cast in bronze to acknowledge their surrounding and the influence of other Blue Conceptualists in their exchange, by means of reflection, a small frosted glass pane; and a used stencil with the word ‘top’ alongside an arrow removed from Ernest’s studio (apparently used to mark the few works that he considered to truly reflect his conceptual rigor).

10. Ryan Gander and Mario García Torres
To loving beyond our means, 2015
Eight commissioned sanguine-pencil drawings made by a professional illustrator of the wives of eight celebrated artists (Anni Albers, Lucienne Day, Helen Fowler, Françoise Gilot, Lee Krasner, Carmen Mondragón, Dorothy Norman and Aurora Reyes), whom in their own right were comparably as interesting as their husbands but greatly under celebrated.

11. Ryan Gander
Obviously not snazzy looking, 2015
Three silk screen printing frames attached together in a concertina form mimicking the appearance of a ‘byobu’ —a folding screen of Japanese origin that often contains calligraphy or decorative imagery— bearing the image of a dot screen gradient that has been exposed onto the mesh of the screen through a photographic process and that displays a handwritten beat poem on hotel stationary by the artist.

12. Ryan Gander
Please be patient – Mario García Torres drinking Gin and Tonic by the pool, Raleigh Hotel, lyrically describing the merits of post-life to post-internet to Jordan Wolfson, whilst I silently day dream of a lion tamer at a circus, Miami Beach, Friday the 5th of December 2014, 2015
A circular mirrored disk was used as a palette to mix paint in the process of the above-mentioned portrait, the result of which is kept within the artist’s archive.
www.proyectosmonclova.com