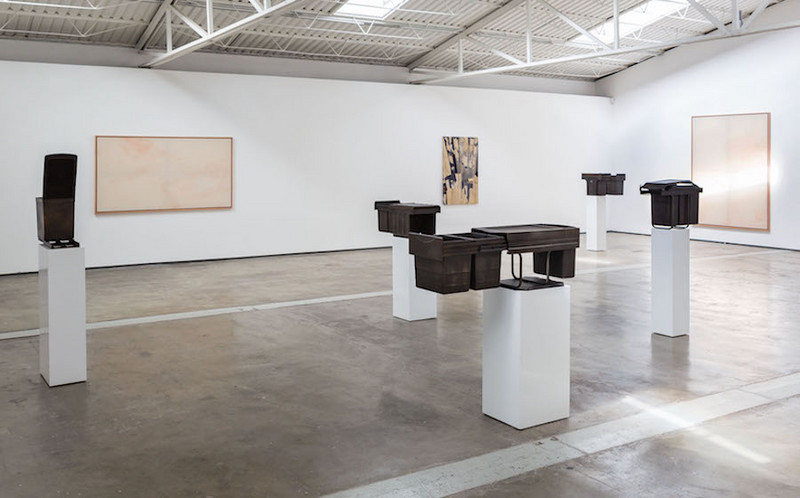 “We have discovered happiness” – say the Last Men, and they blink.
(Friedrich Nietzsche, Thus spoke Zarathustra)

Peoples of the Evening Land is Simon Fujiwara’s second exhibition at Proyectos Monclova. Taking its title from the German Abendland – The Land of the Setting Sun or the Western World, Fujiwara brings together four entirely new bodies of work that together present a fragmented archaeology that abstracts and enlarges the shifts in values, lifestyles, happiness, ecology and politics in post-globalised Northern Europe. Through a series of altered artefacts and documents from German life dating between 1950 and today, the works present themselves as commodities freed from their narratives (be they political, social or economic) and returned to the apparent innocence of their materials. From the fragmented abstract make-up portraits of Angela Merkel – current leader of Germany and the most powerful woman in the Western world – to the shaved fur coats that reveal the patchwork archaeology of their making, basic dichotomies such as skin and body, power and invisibility, surface and content, wealth and poverty are indistinguishable in a world where no amount of analysis, dissection and ‘zooming in’ brings us closer to understanding our basic human nature.

Fabulous beasts, 2015
Fabulous beasts is a series of fur coats purchased in and around Berlin dating from 1950-2000. The coats are shaved to remove all traces of fur and to reveal the archaeology of their production including manufacturers stamps, painstaking patchwork detail, dye marks and animal skin diseases and blemishes. The coats are further deconstructed based on the tailoring pattern and reconfigured into flat skins mounted on a stretcher as tokens of a defunct idea of wealth. Reminiscent of anthropological hides and early man’s clothing the works trace the changing nature of taste, value, luxury and society. In their new state the skins appear both primal and luxurious in an age where the deeper knowledge of production history is fetishized as much as the finished products themselves.

Masks (Merkel: detail A.3, B.5 and B.7), 2015 – Ongoing
Masks is the first in a series of abstract paintings that will together form a giant, fragmented portrait of Angela Merkel’s face, cut into a grid of 37 parts and blown up over 1000 times. Created in consultation with Merkel’s personal make-up assistant and replicating the exact products, positions and application techniques of the make-up that is applied daily to the leader’s face, the works chart the almost imperceptible blemishes, coverings and imperfections of an icon – but only of it’s public surface. Reminiscent of religious shrouds such as the Vera Icon – the only image of Jesus’ face imprinted onto cloth – Masks is a blown up, exhaustive and fragmented documentary project that brings us ‘up close’ to the surface of the world’s most powerful woman with an entirely new set of images that disappear the closer you approach.

Ich, 2015
Precise waste separation is a common and almost sacred practice in Germany. There are around 7 well- defined categories for residential trash and every trash item should be disposed accordingly. However, waste separation remains an individual choice and represents an ethical posture as well as the endorsement of a particular lifestyle that incarnates the capitalistic logic of constant growth and reutilization of resources.
Ich, German for me or I, consists of a selection of German manufactured domestic trashcans with variable divisions and compartments ideal for separation of waste. The trashcans are normally concealed within kitchen cupboards and are retractable. There are over 200 variations of retractable trashcans available in the market to suit each individual customer’s required compartmentalisation. For this exhibition, Fujiwara has coated selected models in liquefied bronze, thus formally evoking a classic sculpture or the idealised figure in a landscape.

Hello, 2015
This video is an introduction to two people’s working lives. Maria, a Mexican trash picker who separates and collects recyclable materials from large landfills in the Mexican – US border to sell by the kilo, and Max, a German freelance computer animation designer working for the advertising industry in Berlin. Maria’s life is radically improved after an international soft drink company makes a philanthropic intervention in her dangerous and dirty work environment. No longer living in the trash, she now lives in a clean, concrete home, drives to work in a Honda and due to her increased health and productivity she can send her daughter to school. Meanwhile, Max’s life has become less structured. Closing down his CGI company last year and no
longer living with his wife and daughter, Max enjoys a freelancers life, self-determined schedule, the chance to travel and do meaningful work.
The double interview is controlled and manipulated by a computer generated severed hand which Maria describes as an object once discovered in the trash as she was working in the violent northern town of Mexicali. This CGI hand was, in turn produced by Max who was born with no arms and sought refuge in computer imaging as a means to operate and manipulate digital reality.
www.proyectosmonclova.com