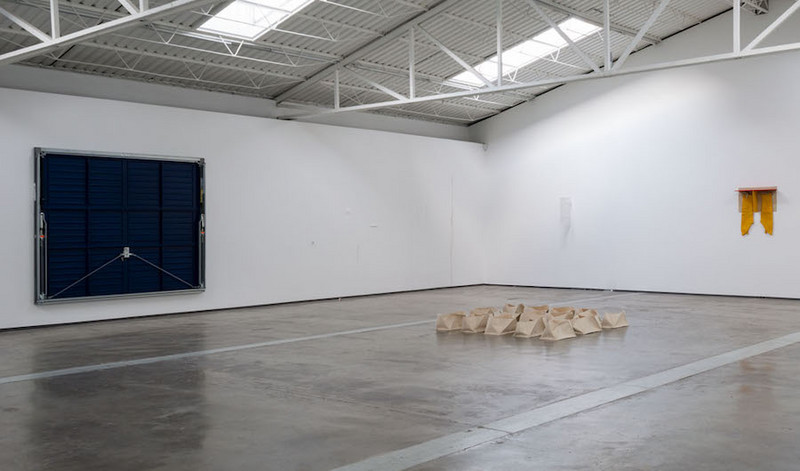 What really matters is that we open our eyes to the fact that the workliness of the work, the equipmentality of equipment, and the thingliness of the thing come nearer to us only when we think the being of beings. (Martin Heidegger)
“SOME / THINGS” seemingly alludes a rather simple matter. The title simultaneously bears an aspect of banality and arbitrariness. The word thing can mean everything and therefore nothing, it can be concrete or abstract. And it is precisely a closer investigation of thing that plays a major role in this group exhibition, bringing together works of 10 international artists, most of them showing in Mexico for the very first time.
Helene Appel chooses to paint things from everyday life, among them rumpled textiles, stitched thread, netting, piles of rice, floor-sweepings and plastic foils: Things that usually escape our attention. She renders these domestic objects at actual size in a variety of media from watercolor to oil and encaustic on untreated canvas and burlap. These paintings of familiar items, realistically rendered, yet devoid of any spatial contextualization, become suspended between illusion, gesture, figuration and abstraction. An image of a concrete object such as a plastic bag suddenly dissolves in pure texture.
In Tank, Tower and Hide, 2012 Bianca Brunner photographs structures assembled in the artist’s studio. By overexposing the analogue film Brunner achieves minimalistic compositions, resembling pictorial quality. The mechanical reproduction of large-scale constructions transforms into an abstract image, ultimately blurring the object of reference. In both cases, abstraction originates in concretion.
Following the classic line of argument the essence of a thing is defined by its material and formal properties as well as by the presence or absence of a purpose. In her new bronze-series Marie Lund explores inversions of materiality and functionality of objects. The artist collects Styrofoam shapes that once protected other items. She subsequently creates a bronze cast of this very shape thus transforming the characteristics of the original object from softness and lightness to solidity and heaviness. What originally served as a shell or negative form for other things, in Lund’s translation becomes the actual, positive shape, which in turn needs protection.
The transformation of the essence of things can be not only achieved through artistic intervention but also through a shift of perception or context. In Andreas Slominski’s G-Fire we are confronted with a classic Ready-made. A blue garage door is fixed at the wall with their front side, hence presenting its backsides to the visitors. The object itself remains what it is, a garage door, and yet within the gallery it seems differently. As if the object had altered before our eyes, we start perceiving new aspects of it, reading new meanings, exploring its metaphoric potential and formal qualities.
In history, garages often became the sites of legendary events: they were the basic units of gigantic firms – like Apple – and also of the success stories of many famous bands. The garage can be read as a mystic site of retreating, hatching and testing things out, but it could also be a large-scale monochromatic tableau.
Another possibility of approaching the notion of things is through the way they affect our desires. Contemporary consumerism and fetishizing tendencies are quite explicitly revealed in Josephine Meckseper’s Analysis of Wealth (2011). This monumental slatwall painting incorporates real objects, photographs and silkscreens, which acknowledge the work of Rauschenberg while the minimal mirrored surfaces and stacked chrome fixtures echo Donald Judd. Combining materials and signifiers from the worlds of fashion, retail and fine art Meckseper calls into question the underlying power dynamics that affect and shape prominent aspects of our culture.
Ind, Franz Erhard Walther’s Fallstueck, 2 x 15 – a sculpture from his pioneering First Work Set 1963 – 1969 – explores the notions of being and becoming. Here the actual (art) object only exists as such through action and change. Walther’s textile sculptures are infinitely mutable forms that function as invitations for use, acting as what he calls instruments for process. Fallstueck can exist as a pile of 15 textile folds, it can also be a floor based group of voluminous open vessels, distributed in space in different constellations as it can be constantly on the move while in hands of a person. Walther’s works remind us that being can only exist through action and change – through becoming.
www.proyectosmonclova.com