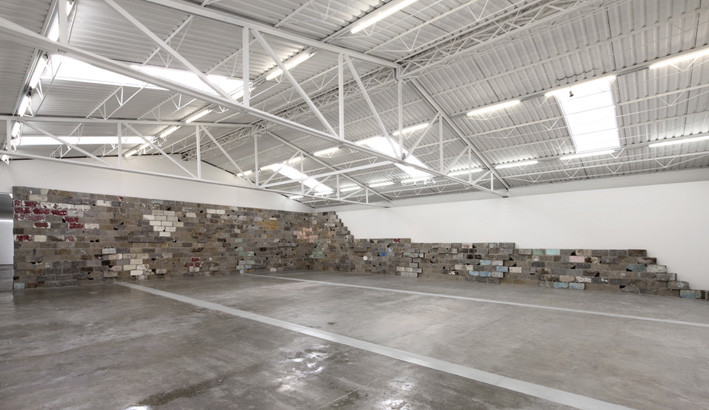 In many growing cities, in areas of low-income housing, it’s common to find piles of abandoned concrete blocks waiting for their last functional use: to form part of a constructive system, sometimes related to an expansion and /or improvement.
These concrete blocks are also found in irregular settlements at the margins of urban developments. Inhabitants from these areas are banned to use these blocks because of their durability, so housing is usually built with fragile materials. Despite this prohibition, the population gains access to these blocks, most of the times used ones, and treasure them as patrimony with the hope of being able to use them one day, in the construction of a more dignified housing.
These blocks, basic construction unites, embody the possibility for improving the living conditions of people. However, when these blocks are found in a state of potential construction, it is difficult to disregard them as ruins.
For this project, Tercerunquinto has established an economy circuit by requesting inhabitants from an irregular settlement in Monterrey to collect used, old or abandoned concrete blocks. The first hundred units will be collected within the community.* When the blocks run out in this area, these people will continue their search in neighbouring districts and so travelling across the city.
Each collected unit will be paid as a way of economical agreement. The recovered blocks will be sent from Monterrey to Mexico City periodically and will be arranged in the gallery space to progressively cover its walls.
In order to accomplish this economical circuit, Tercerunquinto has proposed the gallery directors to maintain the agreement with the people collecting the units, for as long as any interested collector in acquiring the work would like to. This way, the collector will actively participate in the project by determining the length of the agreement and deciding upon the volume of the recollected blocks.
At the extremes of this work, two forms of agreements are evident and distinguished by their economical scales, intersected by the piece that Tercerinquinto and Proyectos Monclova have negotiated.

* Some of these blocks were digged up from the river adjacent to the community, that grew tremendously in 2010 as a consequence of the hurricane, Alex, that demolished many consructions nearby.
www.proyectosmonclova.com