What happened to the other dollar? 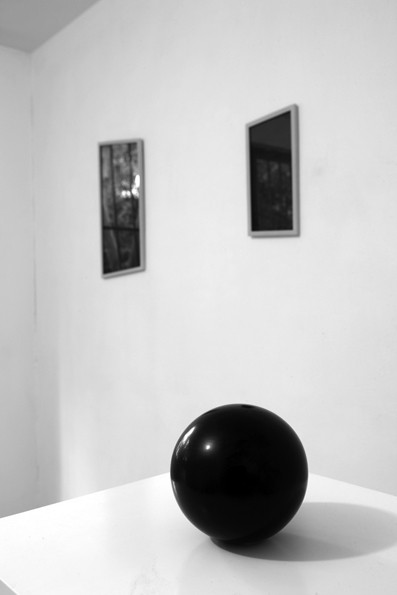 on the wall: Nina Beier, What Follows Will Follow II 2010 (detail)
18 C-prints, frame
Various dimensions
WHAT HAPPENED TO THE OTHER DOLLAR?
Curated by Chris Fitzpatrick & Post Brothers
6 April – 28 May, 2011

Three guests check into a hotel room. The clerk says the bill is $30, so each guest pays $10. Later the clerk realizes the bill should only be $25. To rectify this, he gives the bellhop $5 to return to the guests. On the way to the room, the bellhop realizes that he cannot divide the money equally. As the guests didn't know the total of the revised bill, the bellhop decides to just give each guest $1 and keep $2 for himself. Now that each of the guests has been given $1 back, each has paid $9, bringing the total paid to $27. The bellhop has $2. What happened to the other $1?

Some say there is no missing dollar. They call this riddle a confusing thought experiment—carefully constructed to demonstrate how misdirection and irrelevant facts or questions foil a person's clear understanding of a problem. If they’re correct, then maybe the riddle masquerades as a paradox, but is actually just a case of linguistic and mathematical sleight of hand. Even if there is another dollar, we’d argue that the dollar itself isn’t what’s important. Perhaps what’s more interesting is how hard the other dollar is to find.

Consider the term ignoratio elenchi. The Latin would translate to something like an "ignorance of the nature of how something is refuted." It’s a tactic of transmission that helps us miss the point by arriving at an irrelevant conclusion. An even more familiar strategy is the “red herring” (remember “the Chewbacca defense” from the television show South Park)? We’ve all been duped by these fishy devices, and realized someone changed the subject to divert our question or switch the issue.

In any case, as far as active and structural means of avoidance or deferral go, both red herrings and ignoratio elenchi come in handy in a bind. These distracting procedures disclose possibilities and embellish situations; they concede to logics outside of necessity. However, a bus driver once told us that an overabundance of description does not necessarily make more meaning. We asked him whether or not that depends on how you look at the problem and what you want out of its potential solution, but he changed the subject. As it turns out, he was right.

Last year, for example, Nina Beier’s exhibition What Follows Will Follow evolved into another exhibition through its actual photographic documentation. Together, this sequel of enlarged and a skewed c-prints comprised a single exhibition, but Beier planned for each image to be dispersed subsequently into other exhibitions and situations, circulating further—largely divorced of their content and relationships.

If the skeptics are correct and there is no missing dollar, then the power of the riddle is in its delivery (that is, how the facts are presented to obscure the items of significance, namely, that the numbers add up). Our primary role in Beier’s exhibition was to inhabit the discursive channels to overload Beier’s works with incongruous authoritative interpretations, but arrived at a sort of entropy in erudition.

Back to the dollar, Beier passed the buck and we made a little sense. But that buck stopped there so we brought it here, to Proyectos Monclova. What happened to the other dollar? is hardly autonomous from Beier’s What Follows Will Follow series, but this group exhibition is a non-sequitur (“it does not follow”). We were drawn towards logical fallacies because it’s sometimes more than telling when an argument purporting to establish a specific conclusion is directed towards proving a different conclusion. Our solution was simply to create a new problem.

What happened to the other dollar? is a fork in the road disrupting any cohesion to Beier’s serial exhibition. In the end, it’s as Gertrude Stein said: “Everything is the same except composition and as the composition is different and always going to be different everything is not the same.” (1) The thirteen international artists who’ve contributed projects to What happened to the other dollar? are fluent in several shared conceptual and aesthetic dialects. Their materials are as varied as tautological sculptures, lenticular prints, porcelain, text, and video, but each communicates ideas through nuanced approaches that turn the ways in which those ideas circulate into content, and uses descriptive procedures to transform, display, amplify, and hide meaning.

What further binds each project in What happened to the other dollar? are the ways in which each artist deals with information by exploiting processes of deferral, redaction, repetition, negation, and miscommunication, how interpretation becomes a means of organization, as well as how many of the concepts and processes we stuttered about previously can be seen throughout. Yet visual and procedural likenesses aside, each project was born out of the artists’ different concerns and presented through what are (despite their similar intonation and timbre) disparate voices.

Whether there is or isn’t a missing dollar, we’re talking about it, so merely mentioning its possibility induces its existence, forces a double take. By baiting analysis, the works on display elicit a procession of questions that don’t answer each other, but rather multiply exponentially. Even if the dollar isn’t missing, doesn’t looking for it draw attention to the blind spots in our sight—those islands of lost acuity often surrounded by fields of illuminated vision? The lazy eyes Will Rogan contributed may aid in that view through the refraction of light, but will those balanced prisms cause as distorted a perspective as Beier’s photographs? Etienne Chambaud’s stereo-optic view resists redaction, among other things, filling in a hole in history by encouraging a change in perspective. All perception is grounded in this disappearance and our minds must piece together the missing data, but when alternating observational positions, are we reconstructing the original or constructing fiction?

Where Chambaud’s work negotiates the representational history of an image, an object by Joshua Martinez ludicrously demonstrates the alchemical history within the process of image-making itself. More procedural evidence than referential picture, why would Joshua Martinez create an aniconistic image without its substrate and how can such a figure crystallize without ground? The opposite of a crystal ball, Brandon Walls Olsen’s selfish object withholds its information, denying any attempt to access its infinite interior reflection. In its alienation, the necessary light such a reflection would require is kept out, paradoxically revoking its one true function.

Of course, the constitution of Olsen’s object denies such speculations from being sufficiently verified. In that sense, perhaps it is not the degradation of the copy that Beier reveals, but the abstraction of representation—the mediation of signs, the interchangeability of information, the metamorphic qualities of reproduction and facsimile, the deficiency of description, the unlikelihood of likeness. In What happened to the other dollar? Anthony Discenza’s idiomatic analogies are certainly describing something, but as these shorthand abstract conveyers of ideas explore the dimensions of the signifying chain, do they do so through comparison or conflation? Does his recurring “It” exist, like the missing dollar, hidden in plain sight?

Like Discenza, Malak Helmy’s dusty subject is ensconced in an oversaturation of reference, but through Helmy’s keyword searches and gathering of pixels, is she engaged in a process of over-viewing or does her overview show absence to be transferable? Does aggregation and mediation expand or contract our distance to information? And while Dana Hemenway’s sculptures make the display of other objects possible, it feels like something’s missing. We’ve double-checked the checklist and there are no missing works. Maybe she simply gave the inconspicuous replicas the chance to be what they normally uphold. Snowden Snowden’s humorous prompt also raises questions of duplication and equivalency, but where will they go and what will they look like when they are swept away by an interchangeable and variable object?

Wait, there it is again—that sound is so familiar, even though it plays so irregularly. What movie is Mandla Reuter’s prelude sporadically inaugurating and why does it never premiere? How is it that when something begins again and again its repetition yields difference? In retrospect, Beier’s What Follow Will Follow series was really a traveling exhibition that arrived differently each time it was delivered. Maybe the contents of this travelogue depend on where the crates are opened and who looks inside. But what types of transformations occur in the spatio-temporal displacement of an object? How does an item’s reappearance undermine and reorient its internal logics? For instance, what happens when a work by another artist (actually a collective) is re-presented by Adriana Lara who herself is the singular locus of the collective, Perros Negros? What is the status of a site-specific object when cropped from its intended space? How does severing an object’s relationship to its context allow for both a conjunction and disjunction of meaning, and in what ways does the object emblematize and reflect its travels from one site to another? Of course, that doesn’t explain how Mario Garcia Torres fit an entire slideshow’s worth of travels into a single image or how its incidental cartographical inscriptions managed to chart time and space inside his pocket when projected cinematically. From further still, can the pheasant feathered hat that the artist collective Mahony sent from Austria really substitute Montezuma’s fabled headdress? Given all the myths surrounding the appropriated hat, is Mahony transferring one abstract representation onto another through time-based and material procedures, or simply further confusing a cycle of global and historical circulation?

Where Garcia Torres and Mahony each abstractly register specific locations, Adriana Lara’s video exists within a field of anything—a zone where all spaces can reside. By replacing both figure and ground with a wild card, is her solitary game of arrangement without hierarchy, or is it an enactment of an equivalence of action on the screen? What’s behind the screen? Is the emphasis on individual elements, which remain the same, or on the relations between those elements, which change? In substituting particularity for sameness, how can the ways in which the artists deny us information through their projects serve not as a gesture of suppression, but as a means of disclosing the grammar of relationships and their abstract formation?

Above all, or at least underneath, What happened to the other dollar? is an exercise in the modeling of ideas and information; the imposition and application of abstract rules, systems of language, and procedures of metamorphosis and mediation that determines form. Stretching commonplace strategies of description, the artists expose intersections between the decoys, remainders and lapses in communication precisely by communicating selectively. Their reticence to divulge is a misnomer, as the dollar was there all along, despite there being no missing dollar.

* Gertrude Stein, “Composition as Explanation.” First delivered by the author as a lecture at Cambridge and Oxford, this essay was published by Hogarth Press in London in 1926 and later revived in the volume What Are Masterpieces.
www.proyectosmonclova.com