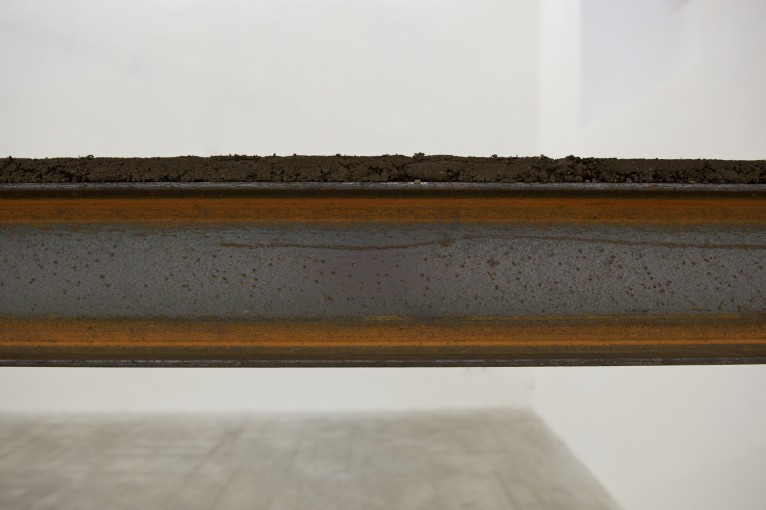 Monitor is delighted to announce the opening of the new solo exhibition in the gallery by Francesco Arena, which for the first time will be entirely taken over by two monumental new works by the artist.

In one room a metal beam has been suspended between two walls and positioned so that its upper surface is at 157 centimetres above floor level – exactly on a level with artist’s eyes. Soil from the Lampedusa immigration shelter covers the surface of the beam in a 2-centimetre layer. The silent presence of this bulky work, aptly named Orizzonte (horizon) literally slices the gallery space in two. It doesn’t matter if this dividing line is above or below: the viewer suddenly becomes aware that this is not a horizon made of sea and sky but its diametrical opposite – sky and earth. A promise, a threat, the line of the horizon is reflected daily in the retinas of thousands of illegal immigrants. Orizzonte runs across the surface of the eye, barely two centimetres of the human face.

Positioned in the second room, Riduzione di mare is a 34-kilogram block of salt – the amount of salt obtained after evaporating a cubic metre of seawater. Over a period of two months, six performers will lick the salt block on alternate days for an hour, two at a time for three days a week during the gallery’s opening hours. Each performer will lick the block with the intention of overwriting a Morse text, so using quick darting movements for the dots and longer, horizontal strokes for the lines.

The Morse text is from a document drawn up by the Dutch organisation United for Intercultural Action (European Network Against Nationalism, Racism, Fascism and in Support of Migrants and Refugees), which has issued a list of names of 16,136 people who have died trying to migrate to Europe. The list includes only the names of those who have received a mention in the media from January 1st 1993 to January 29th 2012. At the end of the exhibition Riduzione di mare will appear as an object that has undergone the erosive process of human movement and mood, scarred both by the past and by the future.