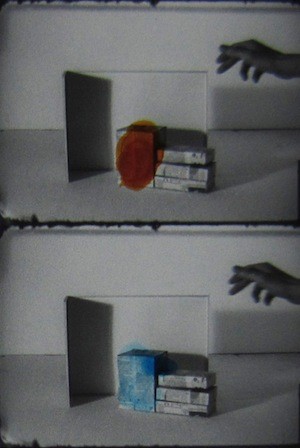 After his participation in the choral project The Plurality of One - curated by FormContent in June 2010 - Monitor is now delighted to announce the first solo show in Italy by the British artist Jesse Ash.
The exhibition title for Monitor's show was a phrase used in a recent media report describing the endeavour by government authorities to ‘win’ control of the message reported through the press describing the reasons, aims and ambitions of military action. Using drawing, film, objects and collaged newspapers, Ash questions socio-political paradigms, traditions of reportage and art historical orthodoxies. Mediated political events, actions or speeches are often used as starting points to provoke a process of making where elements are erased, concealed or coded in order to make visible methods of framing and composition.
A central component to the exhibition is the small coloured object 45 minutes (a proposal) - the form of which is dictated by the grammar of a specific political speech and acts as a sketch for a large scale sculpture made from tent materials (waterproof fabric, light weight tent poles etc). The new 16mm film Composing A Battle For Narrative realizes a still life set, with hand made paper objects placed carefully in relation to one other, as if seeking some sort of formal correspondence. The black and white tableau follows a series of compositions inspired by Giorgio Morandi's paintings, and is interrupted by a single flashing coloured object, hand-tinted frame by frame and based on a text encoded by associating colours to letters.
Ash uses collage to interrupt the authoritative standing of the image. Contrary to traditional forms of collage where juxtaposition is a central tool, these intimately crafted works use layers of repeated imagery to erase and conceal elements of the original, often omitting the subject and revealing the background supporting the intended narrative. The new series of collages presented at Monitor, extends ideas from a previous work; Conference no 1 (orangered), 2009 where the artist removed a speaker and podium from a found image in a newspaper leaving only the stage set backdrop visible.
News from Nowhere is a series of charcoal drawings on paper where a scrunched up newspaper page (the international section of a London paper) is thrown on to white drawing paper. The random composition of the drawings are marked by the shadow of the object - rendered in charcoal and displayed to simulate a meteoric shower. This new body of work utilizes repeated processes of editorial production and presentation, creating versions or copies of the realities identified by the news image, in still life and through political rhetoric.