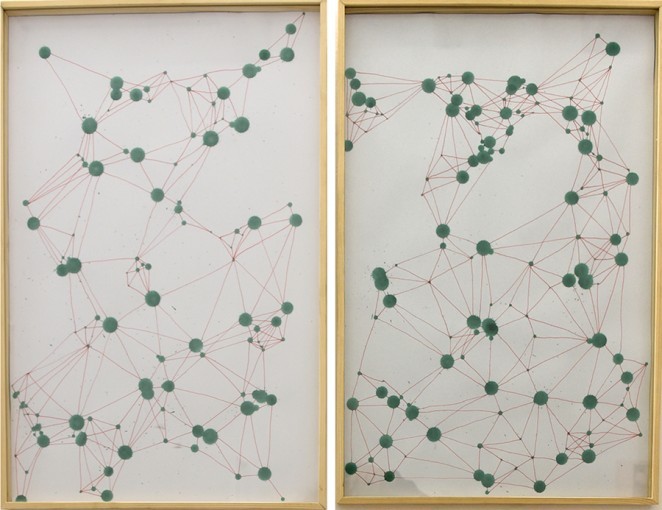 The first collaboration between Nico Vascellari and MONITOR took place in 2005, with a performance aboard a coach carrying some fifty people that included curators, collectors and journalists from Rome’s art scene at the time. The onboard screens of the vehicle showed one of the artist’s best-known videos, the powerfully visionary A Great Circle. Dressed as in the video, Vascellari sang the soundtrack whilst striding over the startled passengers, as the coach sped from the Galleria Nazionale d”Arte Moderna to Porta Pinciana and down Via Veneto, pulling up once more at the steps of the Galleria Nazionale at precisely the moment in which the video ended.
That same year Vascellari decided to open part of his studio in Vittorio Veneto to the public, drawing up a programme of experimental visual and sound events. The space was named Codalunga, like this show of Vascellari’s work.
Over the decade that has elapsed since its founding, CODALUNGA has become an international reference point, an experimental platform that has hosted, among others, artists such as Diego Perrone, Roberto Cuoghi, Bjorn Copeland, Ari Marcopulos, Dominique Fernow, Arto Lindsay, John Duncan Charlemagne Palestine, Mat Brinckman and Phil Niblock.
Vascellari himself refers to Codalunga as “a constantly evolving sculpture”, and in this sense the place is a ‘fast lane’ towards entering and understanding the complex stratifications that make up this artist’s research. The works on display will in fact revolve around those cardinal concepts that encapsulate Codalunga, Monitor’s specular exhibition space providing an equally shared stage, with on the one hand works whose genesis is closely tied up with the space he created in northern Italy and, on the other, pieces from his latest production that are of a more private and personal nature.
Vascellari’s solo show is the pondered, meditated result of a decade of development brought about by constant and tenacious work on behalf of this artist, to whom Monitor is pleased to pay a thoroughly deserved tribute.

Simultaneously with the exhibition by the artist at MONITOR, Codalulnga will move to the Ex Aula Bunker presenting a series of events with the participation of, among the others, Marina Abramovic, Arto Lindsay, William Basinski, Andrea Lissoni, Prurient, Luca Lo Pinto, Vatican shadow, Ron Morelli, Fabio Quaranta, Antonio Grulli. Throughout the month Nico Vascellari will be followed by the cameras of Sky Arts, that will dedicate a documentary to Nico Vascellari and Codalunga.