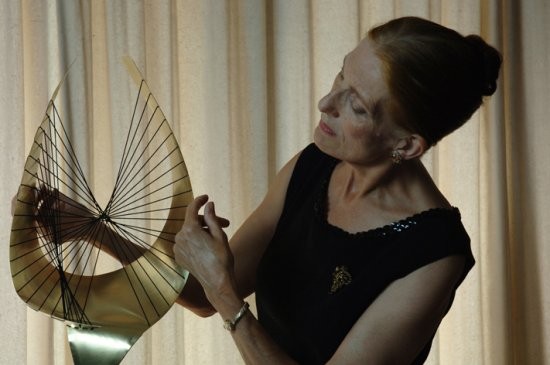 The gallery Monitor is pleased to present Ursula Mayer’s (Vienna, 1970) first solo exhibition in Italy.
Figures, suspended and outside of time, perform almost imperceptible gestures while populating rooms with a discrete, yet strong presence.
As critic Lucia Farinati states: in the 2005-06 video trilogy “33 Portland Place, Keeling House and Villa Mairea the interiors of three different types of domestic architecture (a Victorian house, a modern cluster building and modernist villa) constitute the performative settings of open-ended narrations, characterised by the same fleeting presence of the protagonist.
The dialogical narration of the film Interiors 2006 instead unravels the gestures and movements of two women of different ages but with similar features. Their gaze is transfixed by a work of art, the uncanny beauty of the Orpheus sculpture by Barbara Hepworth (ready made by the artist for the film). An object that is both an artefact and an artifice around which the story seems to revolve.”