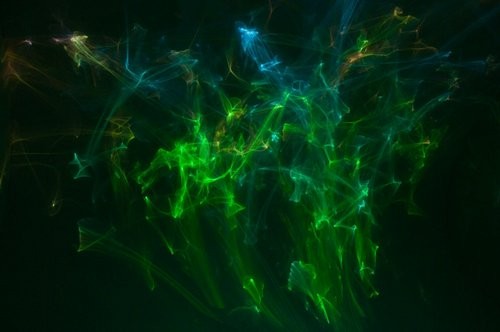 
The thirteenth Sonic Acts Festival in Amsterdam is entirely dedicated to the exploration of space in performative and audiovisual art, film, music and architecture. Sonic Acts XIII - The Poetics of Space examines the importance of physical space in times of far-reaching technological developments, and the physical and psychological impact of spatial designs.

Researching spatiality in the arts forms the core of the festival. How is space defined by a work of art? What does a viewer or listener experience? How do technological artworks deal with the visual, auditory and psychological aspects of spatiality? How has the relationship between technology, space and architecture developed over the past few centuries? How have technological developments influenced our perception and representation of space, and how do we relate to the space that surrounds us?

The programme comprises an overview of recent works and experiments - spatial audio compositions and audiovisual installations - and includes relevant historical examples and utopian ideals and dreams of the 20th century.

Jacob Kirkegaard
Labyrinthitis (2007)
Labyrinthitis relies on a principle that when two frequencies of a certain ratio are played into the ear, additional vibrations generated in the inner ear, so-called ‘distortion product otoacoustic emission’ or ‘Tartini tone’, will produce a third frequency. Jacob Kirkegaard’s (DK) work focuses on the scientific and aesthetic aspects of resonance, time, sound and hearing. His installations, compositions and performances deal with acoustic spaces and phenomena that usually remain imperceptible. Kirkegaard uses unorthodox recording devices to capture and contextualize hitherto unheard sounds from within a variety of environments: a geyser, a sand dune, a nuclear power plant, an empty room, and even sounds from the human inner ear itself.

Ralf Baecker
Rechnender Raum (2009)
Rechnender Raum is a light-emitting geometrical sculpture made of sticks, wires and small pieces of lead that is simultaneously a fully functioning neural network. The functioning of the machine is completely transparent, but it carries out its computations only for itself, concealing the results. Ralf Baecker (DE) builds kinetic installations and sculptures that deconstruct the fundamentals of symbolic processes.

Jan-Peter E.R. Sonntag
GAMMAvert #2 an X-seascape (1998–2006)
A photograph of a seascape, developed using uranium nitrate, a substance that emits gamma waves. The room is flooded with standing waves and a monochrome green glow, formed by a single light frequency, an allusion to the famous ‘green ray’ described by Jules Verne: a flash of green light that, on rare occasions, appears on the ocean horizon at sunset. Jan-Peter E.R. Sonntag (DE) has an academic background in instrumental music, fine art, art history (new media), music theory, composition, philosophy and cognitive science. He has mostly focused on site-specific installations based on sound and biomass but also specifically on monochrome gas discharge light.

Carlo Bernardini
The Light that Generates Space (2010)
A sculptural light installation made of optic fibres that takes over the space and passes through walls, combining the external and internal environments in a single mental drawing, creating a place where light generates space. Carlo Bernardini is an Italian artist who makes abstract light installations using, among others, optical fibres and electro-luminescent materials.

Yoko Seyama
Light Work #6: In Soil (2009)
Light Work #6: In Soil is an installation inspired by the life of cicadas. Cicadas are known for their transparent wings and high pitched buzzing, they live underground as nymphs for most of their lives, feeding on root juice and using their strong front legs for digging. One summer day, the nymphs emerge from the soil and climb up a branch to metamorphosize. Yoko Seyama (JP) is a scenographer and media artist. She concentrates on scenography for time-based art and combines digital materials (video/photo) with real materials (fabrics/paper/elastics), processing these into spatial installations.

Nan Hoover
Impressions (1978, 10’24’’)
A long, narrow streak of light falls across the screen, a hand plays through it. Now the volume of the hand breaks the light, then again the light remains intact. The spot of light becomes an object that can be lengthened by means of the index finger. It is almost as if the finger is drawing a ray of light. Nan Hoover (US 1931–2008) started experimenting with video as an extension of her painting practice and as a documentary medium in 1973. Her videos often explore a visual ambiguity between the body and the landscape, or between abstract and ‘natural’ forms.

Steina Vasulka
Somersault (1982, 5’30’’)
Somersault is an exercise in the phenomenology of vision and the redefinition of space. Steina Vasulka uses mechanized devices to generate an artificial vision that alters the viewers’ perceptions and spatial perspectives. Steina Vasulka’s (IS/US) video works are considered landmarks in video art. The pieces often treat the video signal as a plastic medium, and rework the space of the video image in ways that alter the viewer’s optical perception of the image, confounding the ability to distinguish between two-dimensional and three-dimensional space.

Filmprogramme at NIMk
In the weeks following the Sonic Acts Festival two film nights will be organized at NIMk, showing films and videoworks connected to The Poetics of Space, both followed by a discussion.

Poetics of Space: A NIMk Selection
24 March, 20:00
An evening with selected works from the NIMk-collection relating to The Poetics of Space, from classics to new work by Nan Hoover, Anouk de Clercq, Bernard Gigounon, Thomas Mohr and Kurt D’Haeseleer.

Terrain 09
21 April, 20:00
Terrain 09 takes you on a journey from the extreme visual clutter of over-populated cities to the tranquility of rural panoramic plains and other-worldly imagined spaces.
An evening in cooperation with onedotzero.

Conference
The three-day conference in De Balie forms the heart of the festival. Besides lectures and presentations, the comprehensive programme also features interviews, film screenings and short performances. An international gathering of theorists, artists, researchers, composers and critics will shed light on different aspects involved in working with space, centered on the theme: how does technology change our experience of space, how do artists investigate this in their work, and how do they enhance or modify the spatial experience?

The conference explores this theme during the lectures that link the history of (media) art with scientific and technological developments, drawing on architectural theory, phenomenology, psychophysics and even space travel. In addition the conference includes presentations that reveal how the boundaries of science and technology, and artistic utopias from the past, inspire contemporary artists in their spatial investigations of image and sound. A few catchwords: hybrid space, acoustic ecology, spatialized sound, domes, multiple-screen projections, sonic architecture... Cage & Hiller's HPSCHD, the Pepsi Pavilion, Blur Building, Recombinant Media Labs, Acousmatics, Vortex concerts....

Concerts / Performances / Films
The evening programme in the Paradiso comprises a wide-ranging exploration of the spatial dimensions of image and sound and examines the relationship between spatial architecture and the listening ear and how our brains process sensory input. Events include immersive audiovisual performances, highly intensive listening experiences, experiments with spatial sound, multi-screen projections, films that extend beyond the screen and pure light.

The film programme includes important works from so-called Expanded Cinema. The 1970s saw a short-lived flourishing of artists and filmmakers who literally thought outside the box when it came to filmmaking and who re-investigated and explored all the accepted cinematographic conventions. They examined the spatial dimensions of film, ranging from films that are projected on multiple screens to films that explore the space between the projector and the screen, from live film performances to films as a medium conveying only spatial sound.
This part of the programme includes works by Paul Sharits, Anthony McCall, Takashi Ito, Yann Beauvais, and performances by Bruce McClure, Kanto Horio and others.
A subsidiary programme will feature documentaries about Expanded Cinema.

The four-hour-long programme devoted to the work produced by several generations of soundscape composers and field recordists promises to be an intense listening experience. Visitors enter a dark space and are confronted with recordings of thunderstorms and the sound of airplanes taking off, fragmented urban sound structures, singing deserts, and underwater or underground recordings that are transmitted by different arrays of speakers. Space is made audible and the spatial aspects of sound are integrated into the compositions, sometimes in very diverse ways.
With performances by Annea Lockwood, Jacob Kirkegaard, Barry Truax, BJ Nilsen, Eric La Casa, Gilles Aubry, Hildegard Westerkamp, and others.

The evening programme also features a tribute to the recently deceased innovative composer Maryanne Amacher. Light and sound performances by TeZ, Francisco Lopez and Evelina Domnitch & Dimitri Gelfland and others explore the potential of laser and light projections on the dome of the Planetarium - just one of the special locations in this year's festival.

There will also be an outdoor event by Duncan Speakman titled subtlemob, a blend of locative media, a soundwalk and performance.