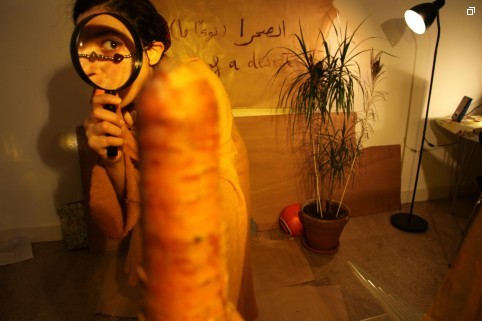 The exhibition ‘witty, lo-fi works with knotty thoughts’ shows works by Mounira Al Solh, Keren Cytter, Shana Moulton, Ola Vasiljeva, Emily Wardill and Nina Yuen. These young artists have a comparable manner of working, aesthetic and style and employ a similar ‘strategy’ for giving shape to their ideas. Among the similarities are that all are lo-fi, use humor in combination with tragedy and draw on performance. Moreover, this way of working is inseparably linked with the subject of the works.

Although there are certain thematic overlaps among the various works, in ‘witty, lo-fi works with knotty thoughts’ it is precisely the approach and aesthetic of the artists that is central. The exhibition evocatively places narrative works next to one another to make comparisons possible and illuminate differences. In what ways do the artists employ their lo-fi, tartly humorous, performative approach in their statements? And how does this strategy and aesthetic relate to the subject of their work?

KEREN CYTTER (Israel, 1977) defies the conventions of genres and language. Much of Cytter's work deals with human relationships. Inspired by her own life and that of her friends, the videos tell about love, desire, loss, problems and lack of understanding. The works deconstruct conventional narrative form by their use of an over-poetic, non-realistic and incoherent language in which there is considerable repetition. Cytter uses this to emphasize the artificiality of film making, so that language functions as a source of misunderstanding in relationships.
This eloquent and expressive language also conflicts with the often wobbly and sometimes blurry images. And finally, her subjects are also inconsistent with the grandiloquent language, being closer to the story lines from soap operas. This discrepancy between word and image contributes to the melodramatic quality of the videos.
In Four Seasons Cytter manipulates several styles and mixes them one with another: home-movie Hitchcock, lo-fi Hollywood glamor, soap-opera Samuel Beckett and soft-core feminism. This produces results which range from the sublime to the ridiculous and from the painfully funny to the surreal. Four Seasons is an homage to everything that is fake. A record with dramatic music plays; thick, fake blood drips on white tiles, fake snow whirls through the apartment, and a woman climbs a dark stairway. Slowly two dramatic – and conflicting- story lines about Stella and Lucy unfold. One story is about a broken heart and a murder, reminiscent of Tennessee Williams's 1947 A Streetcar Named Desire. On top of that, a voice-over describes the building in a way that uses its architectonic elements as metaphors for human conduct. The visual clichés and lo-fi effects simultaneously reinforce the drama and undermine it. Yet this work is not a cynical persiflage on feature films. Four Seasons calls up questions about the hierarchy of memories and about the interpretation and perception of images and language through the medium of film.

As a multi-disciplinary artist MOUNIRA AL SOLH (Lebanon, 1978) works in the media of video, installations, writing, photography and painting. She previously worked with subjects such as Lebanese immigrants and Lebanese socio-political and religious conflicts. Her personal experience of making her way between two countries and cultures (Amsterdam – Beirut / Western – Middle Eastern) often forms the basis for reflections on social-political and artistic questions. Al Solh's approach is not documentary, but could be called fictive, or even fantasy, is poetic, and contains considerable humor. The artist transforms dramatic affairs into ironic situations, thereby appearing to deliberately draw a parallel between social-political questions and aesthetics. She regularly appropriates other artworks, and transforms herself into other characters, principally those of fictional artists. Al Solh's work is characterized by an interplay between fiction and reality that is achieved in a seemingly spontaneous manner.
Al Solh presents her recent work Double Burger and Two Metamorphoses. The two-channel video installation, shows Mounira Al Solh holding various conversations with animals, dressing up as these same animals, and in addition cycling forwards and backwards on a home trainer. In this fictive experiment Al Solh engages in dialogues with the animals which she herself plays. The characters alternate between discussions of philosophers or literary writers such as Lyotard, Multatuli and Spinoza, and everyday concerns such as love and eating. Strangely enough, the essence of the piece emerges best in the conversations about daily life. The conversations tend to end somewhat frustratingly because Al Solh appears to ask too much of the animals – her Dutch guests. In this installation the Lebanese artist reveals her limits as a human being, and her complex relation with The Netherlands. The style of the video is typical Al Solh, a lo-fi hybrid of collage, greasepaint and props alternating with simple portrait footage.

In the ninth part of Whispering Pines SHANA MOULTON (USA, 1976) employs her alter ego Cynthia in a search for the history of the American southwest. Cynthia travels to Taos, New Mexico, and Sedona, Arizona, to seek out the location of the television program Antiques Roadshow. This program is being recorded in a gigantic casino that is owned by a local Native American tribe. On the way Cynthia passes abandoned Land Art sites and the iconic St. Francis of Assisi church immortalized by the artists Georgia O'Keeffe, Paul Strand and Ansel Adams. Cynthia carries along an object for the broadcast which she thinks may be an original Zuni, Native American artwork. Her misconceptions about the history of the local Native American people become painfully clear during the evaluation by the program's expert. Foot baths and massage aids are confused original Indian archaeological art objects.
In this quest for the origin of the art object it is principally hope and uncertainty in relation to the spiritual that emerge. The artist mixes exoticism, the industry around New Age do-it-yourself practices and popular culture. This results in a peculiar story with a surreal aesthetic. Moulton focuses particularly on the collective American obsession with health and beauty for body and mind and sketches the collective anxieties of her generation. She uses dry humor and a lo-fi popular (or simply pop) visual language in her performance-based video. The main character, Cynthia, enters into relationships and contacts with (digital) domestic objects, the lower part of her digital body and the digital environment. With this Cynthia poses questions about the authenticity of perception of the material world and her own body.

HAYLEY SILVERMAN's image-making crosses through sculpture, painting and video. In her videos she digitally manipulates her own footage. Her videos seek to ground an experience of memory in history by evincing a wandering through mediums, time, and space. In one of her latest videos, Mortal Wounded, a landscape becomes a tangible field on the threshold of malleability. In doing so, the visible approaches the tactile, the proximal. The movement of the moon elicits the state of altered perception through artificial techniques. In a digital print Silverman modified the Italian painter Ottavio Vannini's David with the Head of Goliath, a painting that fell victim to an art injury in April, 2007. The painting was kicked in by a 22-year-old whose feelings of disgust paralleled the artist's own feelings of self-disgust in depicting the severed head of Goliath. Silverman's modification of the painting takes the original perspective of the beheading and silhouettes it, masking the grotesque subject. Its new opaque form in the hand of David can be read as a shield instead of a head, creating another kind of reinvented fictional warrior. The last piece displays a smoker's hand relaxed casually. It is the quintessential gesture to suit the fancy, expressing a pause in conversation and a suspension of time.

Inspired by Pasolini's La Ricotta, in the 16 mm film Sick Serena and Dregs and Wreck and Wreck EMILY WARDILL (UK, 1977) mixes close-ups of English stained glass panels with stories about universal themes which she writes herself. In these narratives about love, trust and deceit the artist illustrates ideas prompted by the stained glass. Wardill creates short impressionistic scenes with a theatrical quality, which through their fragmentary character are more inclined toward cinema. For them the artist makes use of actors and elaborate decors. The humorous, exaggerated episodes evoke emotions and devices from cinematic melodrama.Sick Serena and Dregs and Wreck and Wreck examines the historic power of images and stories.
Wardill is interested in the use of paradigms in contemporary political rhetoric. In this film this strategy leads back to the use of stained glass as an official means of communication in the largely illiterate society of the Middle Ages. Wardill is also fascinated by the way filmmakers like Fassbinder used melodrama as a Trojan horse, a method for smuggling political critique into popular entertainment. Among the recurrent concepts in the film installation are rationalism versus emotion and symbolism versus reality. Aside from these analytic elements Sick Serena... defies any simple interpretation. What the stories communicate is never entirely clear. Medieval iconography and modern references alternate with one another and are backed up by slapstick comedy. Ultimately, as emphasized by the irreducible peculiarity of the images, Wardill's films deconstruct their own visual language.

When NINA YUEN (Hawaii, 1981) makes a video it is important for her to stay for at least a week in an artificial environment. The artist herself often plays the central role in her video works. Yuen produces playful and associative videos that are a combination of performance and collage. Frequently paper, moths and other attributes play important roles in them. The artist uses these stage sets to create an imaginary world in which she places (sometimes fictitious) personal memories and collective truths (and untruths) alongside one another.
In this exhibition Yuen is showing her new video David. This work ia an adaptation of a text by Carmen Delzell in which a woman enters into a pact with the devil and becomes eternally indebted to him. In the video Yuen performs a number of magic rituals. The following fragment comes from Delzell's story: "It was beginning to get chilly. Money would really be tight when it got too cold to sell on the street, so I decided to go to a fortune teller. She lived and worked in a storefront in Chinatown. She was fat and sneaky-looking and had only one breast. But it turned out she was right about everything to come and she gave me three wishes. I wished for an apartment, a man, and an antique store...”

OLA VASILJEVA (Latvia, 1981) works in various media. Recently the artist has been working on scenographic installations with videos, slides and diverse objects. Balancing on the edges of culture, new media and conceptual art, her work responds to contemporary culture. The manipulation of existing material drawn from pop and subcultures or more classic sources of inspiration is characteristic of the artist's approach. The installations evoke a strange, surrealistic and uprooted feeling. Vasiljeva is one of the founders of the Ocean Academy of Arts and publisher of the OAOA magazine.
Ola Vasiljeva is showing a new installation, consisting of 100 analogue slides and a number of ceramic objects. The work, entitled 'Le Bateau', 'celebrates the disordering of all senses and numbing them to the very states they propose. It invites dementia and a barbarian craving for the uncultured nature and the unknown.'
www.montevideo.nl