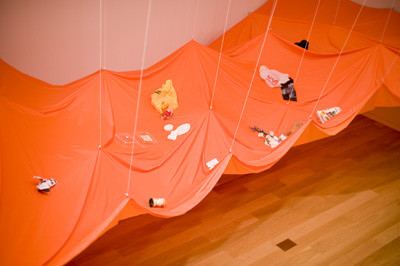 Gabriel Acevedo Velarde (born 1976) from Lima, Peru, studied art in Lima as well as in Mexico City, and is currently based in Berlin. He has gained prominence for his unique works that include videos, drawings, three-dimensional objects and installations. His work has been shown throughout South America, the United States, Europe and other places in the world. This exhibition marks the first time his work will be introduced in Japan, and both Escenario (2004), highly-acclaimed animation work at the Lyon Biennale in 2011, and his new video work Decreto 882 will be on display.

Acevedo has an interest in the nature of what exists in the gap between organizations and individuals. The three-dimensional objects he creates, for example, appear as if they had functionality, like the tools and devices often found in public spaces such as government or commercial offices. In Escenario, one of his works shown at this exhibition, at first glance seemingly bright and comical, he eerily portrays an image where the different effects of such things as power, violence, submission and assimilation that occur between groups and individuals are evoked. The newly-commissioned work for this exhibition, Decreto 882 was shot at the Museum of Natural History, Lima. Images of children visiting the museum interspersed with a mysterious light appear on the screen, creating a mood that is unsettling. Against the background of the public space that is a museum, Acevedo, with his unique touch, highlights the precarious relationship between the institutional and the individual.
www.mori.art.museum